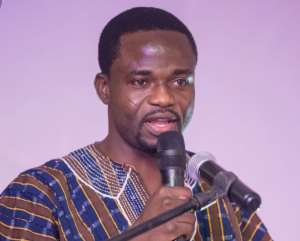 Manasseh Azure Awuni, an investigative journalist says the country will be taken over by "idiots" occupying political offices if Ghana fails to completely eliminate money laundering.

Manasseh added that some people who may have amassed wealth through money laundering can even choose to sponsor their friends who are unfit to occupy government positions to take over power to continue their nefarious activities.

According to him, the situation if not checked will breed unqualified state officials who will run down the country.

“We will have a lot of idiots occupying political positions because they engaged in money laundering to amass wealth which helps them buy votes to secure positions even when they are not qualified for such positions.

“Others who engage in the act and may not be interested in politics can also choose to sponsor their favourite which will only result in bad people ruling us,” he stated.

He said this at a two-day workshop for journalists on anti-money laundering and the financing of terrorism organised by the Financial Intelligence Center (FIC) from Tuesday, July 5 to Wednesday, July 6, 2022, at the Alisa Hotel in Accra.

His comment was a response to a question on the consequences of money laundering if not checked.