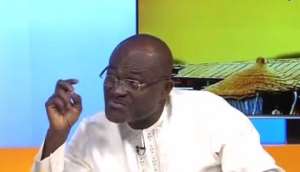 Assin Central Member of Parliament (MP), Kennedy Ohene Agyapong has said he has no doubt 'breaking the 8' will fail for the ruling New Patriotic Party (NPP) government after running to the IMF for support.

Reacting to last Friday’s circular from the government confirming the IMF move, the MP says it made him sad.

Recounting how members of the NPP including himself chastised the erstwhile Mahama government when it took Ghana to the IMF, Ken Agyapong admits that his words have come back to haunt him.

According to him, there is no way the NPP can 'break the 8' if it goes into the next elections with the same people that have led the government to the IMF.

“Going to IMF is just like handing over power to the NDC without a contest because of the noise we made!! I chew my own words back when I said NDC went to IMF because of mismanagement of the government or the economy. So if NPP is going to the IMF what am I going to say?

“Breaking the 8 is going to be tough. You cannot use the face of those who took us to IMF to break the 8. It won’t work. My message to you is simple, you cannot, read my lips, you can't break the 8. It’s the truth. These same faces cannot break the 8,” Ken Agyapong said.

Listen to the Assin Central MP in the video below:

Following the arrival of a team from the IMF, official in-person discussions with a team put together by the Ghana government have commenced today.

Hottest Photo Reports
Catch up with all the political quotes from our politicians.
Advertise here
More from Headlines
ModernGhana Links
'Forgive me if I was wrong to spearhead renovation of Asomdwe park' – Koku Anyidoho begs Mills’ family
IGP shakes up top officers
Akufo-Addo doesn't have to advertise his reshuffle — Kyei-Mensah-Bonsu
TOP STORIES

'Forgive me if I was wrong to spearhead renovation of Asomdw...
3 minutes ago