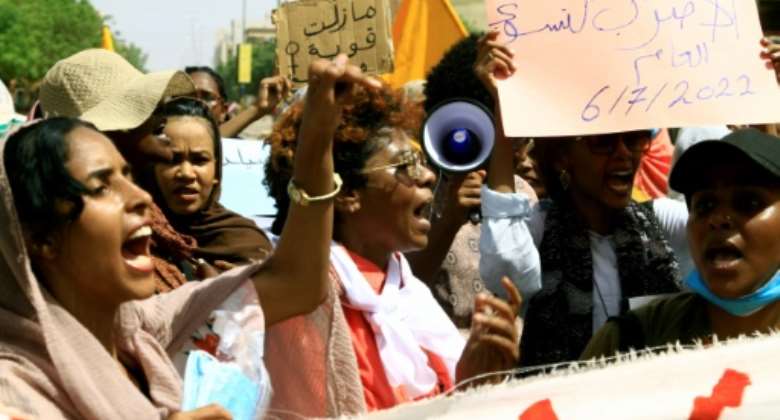 Sudanese women join the ongoing protests against military rule demanding that "the soldiers to the barracks". By - (AFP)

Sudan's coup leader Abdel Fattah al-Burhan on Wednesday dismissed the last civilian members of his ruling body as part of a power shift he has proposed, but protesters who have rejected his pledge again took to the streets.

"The blood of the martyrs did not flow in vain," hundreds of women protesters chanted in Khartoum about pro-democracy activists who have been killed in street violence, also demanding a return of "the soldiers to the barracks".

Burhan -- who grabbed power in a coup last October that drew international condemnation -- in a surprise move Monday vowed to "make room" for civilian groups to form a new transitional government.

He also said that the ruling Sovereign Council he chairs would be disbanded and, in an apparent move to carry out the process, issued a decree relieving five little-known civilian members of their posts.

Several of them told local press that they had received no formal notification and were surprised to discover that their official vehicles had been taken away.

The transitional government uprooted by Burhan last year had been painstakingly forged between the military and civilian factions in 2019, following mass protests that prompted the army to oust longtime dictator Omar al-Bashir.

They also called for "continued public pressure", a call heeded by protesters who manned makeshift street barricades of rocks and tyres for a seventh straight day.

Protesters have demanded a restoration of the transition to civilian rule despite repeated crackdowns by the security forces, who have in recent days fired live bullets, launched barrages of tear gas canisters and deployed water cannons, according to medics.

Burhan's pledge Monday to step aside for a new civilian "government" was accompanied by another pledge -- the establishment of a new "Supreme Council of the Armed Forces".

This body would be in charge of defence and security, he said, feeding into concerns among opponents that it would not be answerable to any government.

Burhan said the new body would combine the regular army and the paramilitary Rapid Support Forces, a powerful unit commanded by his deputy, Mohamed Hamdan Daglo.

Key FFC member and ex-rebel Yasser Arman warned that Burhan's "intention is to choose a prime minister who is a wolf in sheep's clothing and takes his orders from the military council".

Arman said that Burhan's announcement was aimed at the "regional and international community, some of whose members are looking for quick solutions" including those who he warned are "prioritising stability over democracy".

On the streets of Khartoum, protesters defied security forces and held firm on their makeshift barricades, despite heavy fatalities late last week. By - (AFP)

The FFC has so far refused to take part in talks with military leaders, despite pressure from international brokers that range from the United Nations to the African Union and regional bloc IGAD.

On Tuesday, following an IGAD emergency summit chaired by Burhan in Kenya, the bloc praised efforts to finding "lasting solutions to the political situation", adding that it "appreciated the positive steps" taken by Sudan's leaders.

'Too early to tell'

"The blood of the martyrs did not flow in vain," about 100 women protesters chanted in Khartoum about pro-democracy activists who have been killed in street violence. By - (AFP)

Sudan has been rocked by near-weekly protests since the October coup, with thousands marching in multiple cities.

Pro-democracy medics said nine demonstrators lost their lives last Thursday, the deadliest violence so far this year, which brought to 114 the number killed in the crackdown since October.

Burhan's announcement has been treated cautiously by international players, with UN Secretary General Antonio Guterres saying he hoped it would create "the opportunity ...to reach an agreement that ultimately leads to a civilian-led transition to democracy".

The United States said it was "too early to tell" the impact, with State Department spokesman Ned Price urging all sides to seek a solution towards "a civilian-led government" with "free and fair elections".

Sudanese protesters gather in the capital Khartoum on July 5, the latest in a series of rallies since an October military coup. By - (AFP)

Protesters argue that the army chief has made such moves before.

In November, a month after the coup, Burhan signed a deal with Abdalla Hamdok, the prime minister he had ousted in the power grab and put under house arrest, returning him to power.

But many people rejected that pact and took to the streets again, and Hamdok resigned in January warning that Sudan was "crossing a dangerous turning point that threatens its whole survival".