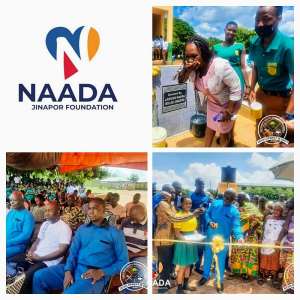 The borehole which cost 40,000.00) is to help resolve the water scarcity the school is faced with.

At a short ceremony at Jema Senior High School to commission the project, Mr Dauda Abdeen, Secretary to the Foundation and Personal Assistant to Lawyer Naada Jinapor, the founder, gave assurance of the Foundation’s readiness to support the school to ensure both students and teachers were comfortable for effective teaching and learning, hence the construction of the borehole.

In his welcome address, the Headmaster of Jema Senior High School, Mr Amoateng Nyarko expressed the school’s appreciation to Lawyer Naada Jinapor for her quick response to their request.

"He who provides water gives life. Water is life so Naada Jinapor and her Foundation have given the school life," Mr Amoateng Nyarko noted.

He further revealed other things Naada Jinapor Foundation has done for the school such as reroofing of the boys' dormitory which was ripped off by a violent rainstorm.

On her part, the queen mother of Jema, Nana Abena Baadjei praised Naada Jinapor for her philanthropic works and asked for God’s blessings and protection upon her.

The District Chief Executive for Kintampo South, Hon Opoku Nyame commended Lawyer Naada Jinapor for her kind gesture and contribution to the development of the district. He mentioned the provision of water and hospital beds for Mansie CHIPS compound by Naada Jinapor Foundation few months ago as some of her philanthropic works.

He said government alone cannot shoulder all responsibilities, therefore there was the need for other well-to-do individuals to help develop the District. He also encouraged the management of the school to cultivate a maintenance culture so as to ensure the facility last longer.

Some of the students who spoke to Newsmen expressed gratitude to Lawyer Naada Jinapor Foundation for the borehole.

According to the students, they will no more walk long distances to fetch water during class hours.