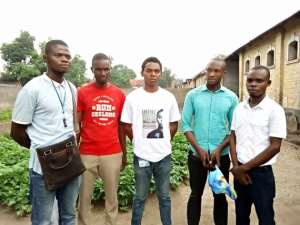 A judge at the High Court in Mbandaka, the capital of the Democratic Republic of the Congo’s western Équateur province, on Tuesday acquitted and released journalist Chilassy Bofumbo, who had been jailed since he covered a November 2021 protest, according to the journalist, who spoke to CPJ by messaging app and tweeted his release.

Two other journalists — Patrick Lola and Christian Bofaya — remain jailed in the central prison of Mbandaka, the capital of Équateur province, according to their lawyer, Pontife Ikolombe, who spoke to CPJ by phone.

“The acquittal of journalist Chilassy Bofumbo is welcome news, although he should never have been arrested or detained for over seven months,” said Angela Quintal, CPJ’s Africa program coordinator, from Durban. “Authorities in the DRC should swiftly and unconditionally release journalists Patrick Lola and Christian Bofaya, who have spent nearly six months behind bars. Press freedom remains on trial in the DRC.”

Bofumbo is editor-in-chief of local broadcaster Radio Télévision Sarah, a correspondent for the Flash Info Plus news website and Radio l’Essentiel online broadcaster, and a coordinator for FILIMBI, a nongovernmental organization that promotes civil participation among Congolese youth, according to CPJ research. On June 28, 2022, the prosecutor called for Bofumbo to be imprisoned for three years and fined, according to media reports.

Freelance reporter Lola and Bofaya, a reporter for privately owned E Radio, have been held since January 10 over protest coverage. Their case remains under consideration of the national-level Court of Cassation in DRC’s capital Kinshasa, as CPJ documented.