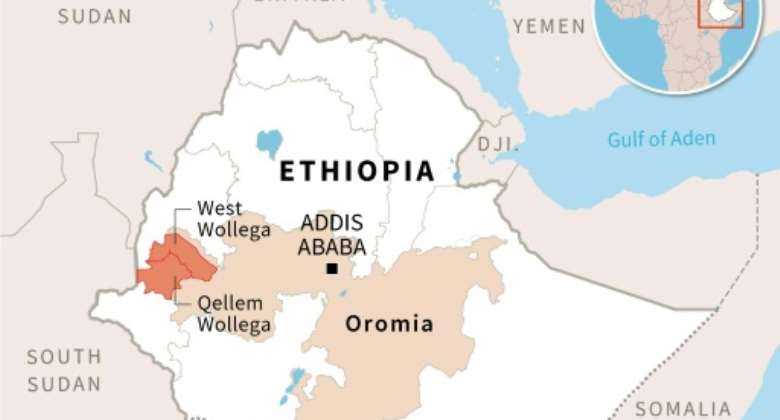 Map of Ethiopia locating the areas of West Wollega and Qellem Wollega in the region of Oromia. By Jonathan WALTER (AFP)

An Ethiopian rebel group on Tuesday denied accusations it was responsible for a massacre of civilians in the restive far west of the country, and pointed the finger of blame instead at government-allied militias.

Violence has been on the increase in the Oromia region in recent months, with one rights group suggesting the situation there had been overshadowed by the brutal conflict that erupted in Tigray 20 months ago.

Prime Minister Abiy Ahmed said in a statement posted on Twitter on Monday that the Oromo Liberation Army (OLA) had committed mass killings in the Qellem Wollega area of western Oromia, without giving further details.

"Two divisions of the ENDF (Ethiopian National Defence Force) along with allied forces are occupying the towns of Qellem Walaga, including Machaara where civilians were killed en masse by the regime's militias as security forces did nothing," he wrote.

"Both local & international entities have to demand independent investigations and hold Abiy and co accountable for their cruelty."

The OLA is a shadowy group that gained new prominence last year when it struck up an alliance with the Tigray People's Liberation Front (TPLF) that has been at war with government forces in northern Ethiopia.

Both have been designated terrorist groups by Addis Ababa. Abiy on Monday vowed to "eradicate" the OLA, although he has opened the door to possible peace talks with the Tigrayan rebels.

The US-based Amhara Association of America said Monday's attack targeted ethnic Amharas in Mender 20 (Village 20) in Qellem Wollega in the west of Oromia, the largest and most populous region of Ethiopia.

It said the killings began at dawn and lasted several hours.

A survivor quoted by the regional state-run Amhara Media Corporation said at least 300 bodies had been collected in the village.

It was not possible to verify the information as access to the area in western Oromia, which borders South Sudan, is restricted.

In a country comprising dozens of ethnic groups, the Amharas are the second largest after the Oromo.

Last month, the Ethiopian authorities accused the OLA of killing several hundred mainly Amhara people in the village of Tole in West Wollega, an area adjacent to Qellem Wollega.

The OLA, which has been fighting the federal government in Oromia since 2018, denied the claims.

No official toll from the Tole massacre has been published, but Abiy's spokeswoman Billene Seyoum said last week that 338 victims had so far been identified.

On June 30, several days after the Tole attack, government spokesman Legesse Tulu told reporters that districts of Qellem Wollega, Western Wollega and Horo-Guduru Wollega were "under the complete control of our joint/coordinated security forces".

The Ethiopian Human Rights Commission, a state-affiliated independent body, on Monday called for an "urgent reinforcement" of government security forces in the area to prevent further civilian deaths.

"The continued insecurity in the area and what appears to be the ethnically targeted killing of residents must be put to a stop immediately," EHRC chief commissioner Daniel Bekele said in a statement.

US-based Human Rights Watch said on Monday it had documented serious abuses in Oromia, including in the west where an "abusive" government campaign against the OLA had trapped civilians in the crossfire.

It said the Tigray conflict, which has witnessed a lull in recent months after the government declared a "humanitarian ceasefire", was overshadowing a "persistent cycle of violence" against civilians by security forces and armed groups in Oromia.