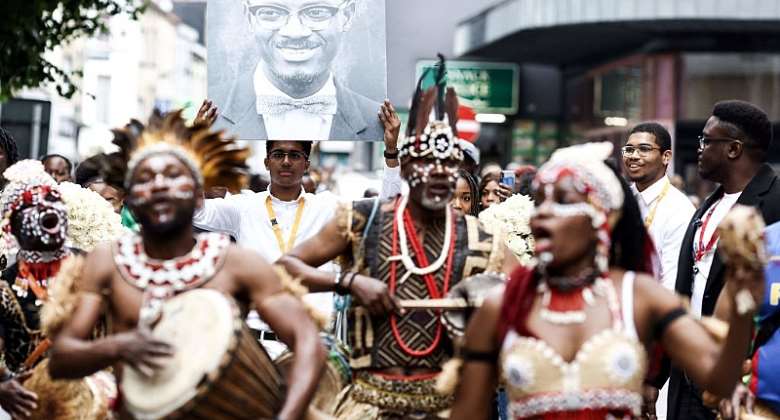 A march following the return of Patrice Lumumba&#39;s tooth from Belgium – all that is left of the anti-colonialist icon murdered in 1961. - Source: Kenzo Tribouillard/AFP via Getty Images

Patrice Lumumba is the hero of the Democratic Republic of Congo's truncated bid for complete independence . He was assassinated by local counter-revolutionary forces with the help of the CIA and Belgian authorities in 1961. Since then, all over the developing world, Lumumba's name has come to stand for defiance against colonialism and imperialism.

The manner of his death was particularly distressing. He was humiliated and tortured before he was murdered. His body was then doused with acid to facilitate decomposition. A Belgian official reportedly kept his teeth as mementos as if to add another grisly and macabre dimension to the entire sordid affair.

The return of Lumumba's tooth after 61 years leaves many questions unanswered and threatens to open a can of worms. This inordinately belated gesture came without a formal apology for the damage caused by Belgian colonialism or a pledge of wide-ranging reparations.

The ghost of Lumumba

Ever since his death, it seems the ghost of Lumumba has plagued his aggrieved country, first with the tortuous and bizarre reign of Mobutu Sese Seko and then with Laurent Kabila . Patrice Lumumba. Shutterstock

But it was under Belgian colonial rule that the plunder of the Congo began in earnest. King Leopold II , bloated with colonial self-righteousness, instituted a reign of devastation that left an estimated 10 million people dead. Rubber plantations were transformed into a hell in which the enslaved who didn't meet their production quotas had their limbs chopped off. Since then, the DRC has been gripped by a delirium of dense, impenetrable, equatorial traumas.

Indigenes of the DRC have always been used as disposable pawns in their externally foisted tragedies. And these tragedies have descended on them as thickly as their famed tropical forests.

What are we to make of the ordeal of Ota Benga , for example, the Congolese teenager who, on account of his unusual teeth, was captured and relentlessly exhibited in the anthropological zoos of America? Treated like a performing monkey, he experienced the most heartless form of visual cannibalism, physical humiliation and psychological torture. Would his teeth be returned to the DRC as well? Ota Benga at Bronx Zoo. Wikimedia Commons

Indeed, the handing over of Lumumba's tooth represents a gesture of reparation; the return of pilfered colonial goods to the rightful owners. But what about the tooth's attendant torture? This much delayed political gesture broaches difficult issues surrounding the African quest for genuine reparations from erstwhile colonial overlords.

The current plight of the DRC – all but a failed state – makes us weep over its enduring state of abjection. A huge country blessed with innumerable natural resources, with some of the rarest and most important minerals of earth, it remains crippled by conflict and plunder of its vast natural resources.

It is certain that if Lumumba had been allowed to pursue his bold project of emancipation and development, the DRC story would have been vastly different.

It is almost impossible to understand why the potentially richest country in the world remains one of the poorest.

And yet the wealth of the DRC continues to shine through the accomplishments of its talented people. Out of depleted and crumbling infrastructure, governmental emasculation and chronic internecine strife, miraculously, creative excellence continues to emerge.

How can one ever forget the timeless music of guitarist Franco Luamabo , vocalists Tabu Ley and M'bilia Bel , singer-songwriter Fally Ipupa and so many other Congolese musical geniuses? M'bilia Bel. Jack Vartoogian/Getty Images

Or the accomplishments of phenomenal scholars such as Congolese philosopher V.Y. Mudimbe , whose work singularly redefined the manner in which the west came to understand Africa? Mudimbe reconfigures your mind every time you encounter him. Yet the inhospitability of the DRC keeps him secluded in the US. The rest of the world continues to benefit from Congolese talents and minerals while the country itself regresses.

The eclectic and boisterous urban culture that produced the Congolese rumba and soukous out of the potholed streets of Kinshasa also birthed visual artists such as Monsengwo Kejwamfi “Moke” , Cheri Cherin , Chéri Samba , Patrick Mutombo, Marthe Ngandu and many others.

Collectively, their works capture and reflect the life and energy to be found in the DRC's frenetic and teeming postcolonial metropolises. But there is a snag. These largely self-taught artists were cut off from their precolonial artistic heritage due to the violence of the colonial encounter.

As in many other parts of Africa, over 2,000 works of art stolen from what is now the DRC remain in the museums of Europe. These works are not merely aesthetic and symbolic. They are also central to the continuation of integrated cultural evolution. In addition, they encompass swathes of history and tradition spanning millennia. The return of those stolen pieces of cultural heritage and an awareness of what they truly represent would be a starting point for meaningful reparations for the past.

Ultimately, beyond its cosmetic or even symbolic value, the gesture of returning Lumumba's violated tooth ought to lead to a considerable degree of healing the DRC so desperately needs, in organic, broadly and deeply conceived ways. This means acts of reparations must not only be loaded in meaning but must also be essentially transformative in nature. In other words, they must include socioeconomic and cultural deliverables.

Latest Photo Reports
Catch up with all the political quotes from our politicians.
Advertise here
More from Article
ModernGhana Links
How not to respond to drought: lessons from Angola
Mozambican unions hit snooze on a national strike: why it's a bad thing for workers
Atiku Abubakar: Nigeria's perennial presidential candidate is back on the stump
TOP STORIES

Ghanaians must be involved in the process of negotiations wi...
20 minutes ago