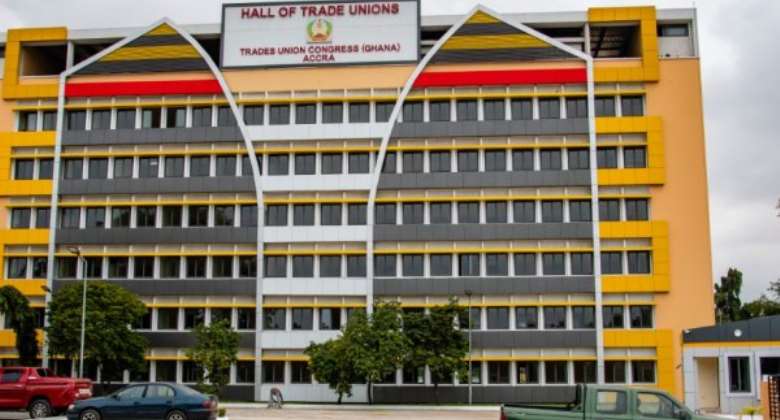 The Trades Union Congress (TUC) has vowed to resist any attempt by the Government to freeze employment and salary increment in the public sector under conditionalities by the International Monetary Fund (IMF).

This comes as Ghana seeks for support from the international financial institution for its economic programme to recover from the shocks from COVID-19 and the recent Russia-Ukraine conflict.

These happenings, together with inflationary pressures, hikes in fuel prices, transportation and goods and services, depreciation of the Cedi, and exchange rate challenges have compounded economic hardship in the country.

The Government, following an endorsement by the Cabinet, has invited the IMF to support the country with a programme to recover from the current economic difficulties.

Recounting how a similar programme in 2015 led to many workers losing their jobs, with others that needed to be employed not having that opportunity, the Union said it would not allow any effort to replicate the same measure this time.

It noted that while Community-Based Health Planning and Services (CHIPS) compounds were without skilled medical personnel, trained nurses picketed at the Ministry of Health and Ministry of Employment and Labour Relations for jobs due to IMF conditionalities.

The three-year IMF-Extended Credit Facility (which lasted from 2015 to 2018) also led to a steep decline in real wages.

It said: “We would like government to note that the working people of Ghana will do whatever it takes to prevent the imposition of needless hardships on them and the good people of Ghana.”

In a statement signed by Dr Anthony Yaw Baah, Secretary General of TUC, it prompted the Government of its agreement during the negotiations for 2021 and 2022 base pay not to layoff public sector workers.

Dr Baah described the decision by the Government to go to the IMF as “a tragic mistake and a sad one for Ghana,” and insisted that the eighteenth IMF programme would not solve Ghana's problems.

“Our history of engagements with the IMF provides ample evidence that IMF-sponsored programmes and policies cannot change our economic circumstances,” he said.

He called for stakeholder engagement with the Government's social partners, including Organised Labour and the Ghana Employers' Association (GEA) to find a lasting solution to the economic challenges.

The Secretary General said the country could achieve sustainable economic growth and development: “If we build consensus among key stakeholders through a genuine social partnership.”

He backed calls by some economists to develop measures that tackled the structural constraints to economic and social development.

These constraints include balance of payment difficulties, being a highly import-dependent economy, reliance on indirect taxes, low revenue generation, and not being prudent with Government finances.

The Government insisted until last week that it would not go the IMF for a bailout programme because the consequences were dire, noting that it had the ability to revive and transform the economy.

However, the President, Nana Addo Dankwa Akufo-Addo in a statement issued on July 1, by the Information Minister, directed the Finance Minister to begin formal engagements with the IMF for support of an economic programme.

Mr John Kumah, a Deputy Minister of Finance, explained that the Government's decision to go for an IMF programme at this time was to help the country to come out from the economic challenges faster.

He said: “Our objective as government is to restore confidence in the economy and rebound it...”