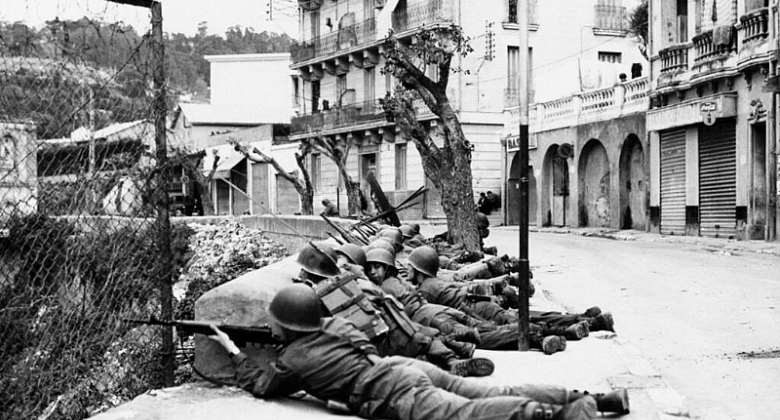 Algeria marks 60 years of independence from France on 5 July, but competing narratives over atrocities committed during more than a century of colonial rule still trigger bitter diplomatic tensions between Paris and Algiers.

Algeria won its independence after a gruelling eight-year war that ended with the signing of the Evian Accords in March 1962.

On 5 July of that year – just days after 99.72 percent of the population voted for independence in a referendum – Algeria finally broke free from colonial rule. But memories of the 132-year occupation continue to plague its ties with France.

Algerian authorities are planning to mark the anniversary with pomp and ceremony capped by a vast military parade – the first of its kind in 33 years – in Algiers.

A show is also planned at the capital's opera house that "retraces the long history of Algeria", said the Minister for Independence Fighters, Laid Rebiga.

The government has even commissioned a logo consisting of a circle of 60 stars containing military figures and equipment to mark "a glorious history and a new era".

In October, Algeria recalled its ambassador from Paris and banned French military planes from its airspace, which France regularly uses to reach its forces battling jihadists in the Sahel region.

That came after a bitter row over visas, followed by media reports that Macron had told descendents of Algeria's war of independence that the North African country was ruled by a "political-military system" that had "totally re-written" its history.

But the French government tried to smoothen things over.

France has ruled out any form of apology for the colonial period. But Macron has also made a number of gestures aimed at mending ties with the former colony.

Visiting Algiers during his first presidential campaign in February 2017, he described colonisation as a "crime against humanity".

He has since acknowledged the French army was behind the death of Algerian nationalist lawyer Ali Boumendjel and anti-colonialist French mathematician Maurice Audin.

France has returned the skulls of 19th century Algerian resistance fighters and opened state archives on the Algerian war.

And the two sides appear to have moved on from the latest crisis. Macron and his Algerian counterpart, Abdelmadjid Tebboune, confirmed in an 18 June phonecall their desire to "deepen" relations.

Tebboune even congratulated Macron on his "brilliant" re-election and invited him to visit Algeria.

Historian Amar Mohand-Amer said it was time for "a quick return to a normal situation", adding: "Sixty years after independence, isn't it time we took the heat out of this debate?"

But the anniversary celebrations come at a time of raised tensions in the wider region around Algeria. The country cut ties with regional arch-rival Morocco last August, accusing it of "hostile acts".

In early June, Algiers suspended a two-decade-old cooperation pact with Madrid after Spain backed Morocco's stance in the long-running dispute over Western Sahara.

To the east, in Libya, the emergence of two rival governments has raised fears of a return to armed conflict after a two-year truce.

And to the south, Mali is in crisis after army officers, disgruntled at the government's failure to roll back a jihadist uprising, ousted president Ibrahim Boubacar Keita in 2020.

According to Amnesty International, in May 2022 local watchdogs reported that at least 266 activists were "languishing in Algerian prisons solely for exercising their rights to freedom of expression and assembly".

Sixty years after Algeria gained independence, "basic freedoms and human rights are still being overlooked, trampled upon or actively curtailed”, it added.