I.Coast eyes cassava for its bread as wheat prices surge 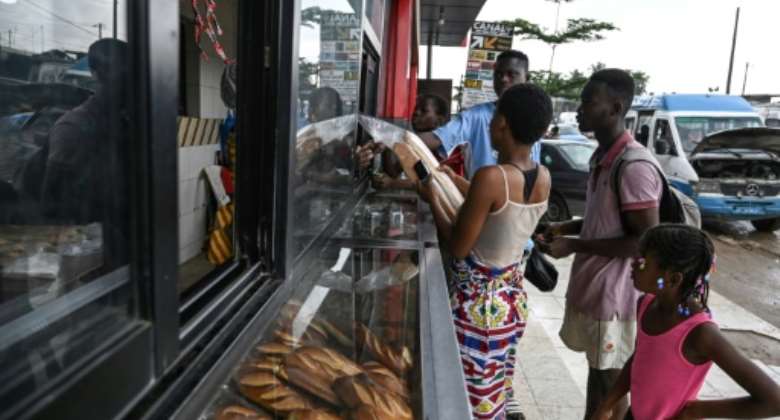 Soaring prices for wheat have triggered concern for bread prices in Ivory Coast, where the baguette is a daily staple. By Sia KAMBOU (AFP)

As wheat prices are driven upwards by the war in Ukraine, bakers in the West African state of Ivory Coast are starting to use locally produced cassava flour to bake bread.

The baguette, the stick of bread that is much loved in the former French colony, is commonly seen as a benchmark of the cost of living.

But Ivory Coast does not produce wheat domestically, instead importing up to a million tonnes of the grain per year, mainly from France.

Surging wheat prices have stoked concern about the impact in a country of 25 million where the average wage is less than 250,000 CFA francs ($400) per month, and which was shaken by a wave of violence less than two years ago.

Both Ukraine and Russia are large wheat producers, and lost harvests and other uncertainties have driven up prices of the global staple.

In response, Ivorian authorities have pegged the price of a baguette at between 150 and 200 CFA francs ($0.25 and $0.30) depending on weight, channelling subsidies worth 6.4 billion CFA francs (about $10 million) to the country's 2,500 bakeries.

Bakers, with the government's support, are also starting to substitute a small portion of wheat flour with flour from cassava, a root vegetable.

The cassava substitution plan ticks the boxes for economy and sustainability. But what do Ivorians think?

"Everything has become expensive in the market," said Honorine Kouamee, a food vendor in Abidjan's Blockhaus district who was cooking pancakes made of wheat mixed with coconut flour.

"If we can make bread with local cassava flour it will be better. People are willing to eat local products."

The national consumers' confederation has thrown its support behind the cassava substitute.

"It will provide a stimulus for manioc producers and maintain the price of bread," said its president, Jean-Baptiste Koffi.

But image and taste are important and some bakers are cautious.

"For Ivorians, bread made with cassava is associated with poor-quality bread. Consumers will have to be made aware of these new flavours."

The authorities will have to run a promotional campaign, he said.

Cassava is high in starch and is a good source of dietary fibre.

The starchy root vegetable is then ground into flour -- a small proportion is then added to wheat flour as a low-cost substitute. By Sia KAMBOU (AFP)

But high proportions of cassava flour lower the mineral and protein content in bread, compared with traditional wheat, a 2014 study in Nigeria found.

Financially, even using just a small portion of cassava flour would provide the government with some relief.

Last year, 10 percent of the national budget of around $16 billion was spent on food imports, despite the country's fertile soil.

Ranie-Didice Bah Kone, executive secretary of the state-run National Council for the Fight against the High Cost of Living (CNLCV), says it is time to unlock Ivory Coast's rch agricultural potential.

During a visit to a cassava flour processing plant in Abidjan, she called for immediate measures to increase the supply of local flours, in addition to subsidies for the wheat sector.

Concerns in West Africa about dependence on imported wheat are not confined to Ivory Coast.

A bakery in Yopougon, a working class suburb of Abidjan, where the flour mix is used to make bread. Consumers may take time to adapt to the starchier taste, say bakers. By Sia KAMBOU (AFP)

On July 19, bakers from across West Africa will meet in Senegal's capital Dakar to launch an association to lobby for setting a regional benchmark of setting up to 15 percent of local content in bread products.

Ivory Coast has a history of turbulence.

In 2020 scores died in pre-election violence -- an episode that revived traumatic memories of a brief civil conflict in 2011 in which several thousand people were killed.

In 2008 riots broke out when the cost of rice, milk and meat soared.