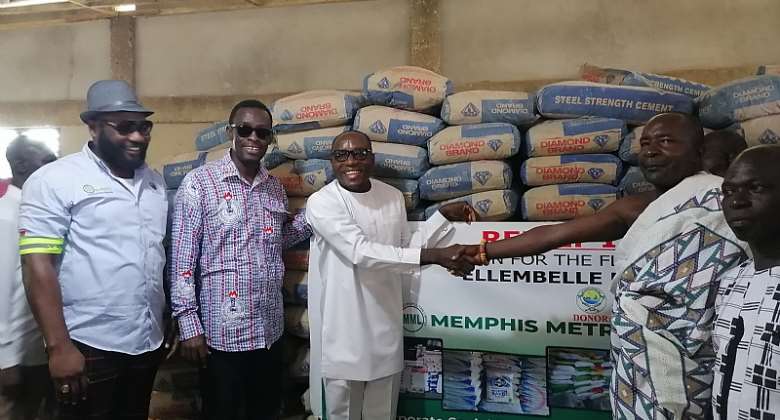 The Memphis Metropolitan Construction Limited has donated relief items worth two and fifty thousand Ghana Cedis (GHC250,000) to the flood victims of Nzema Akropong in the Ellembelle District of the Western Region.

The rest are 200 boxes of soft drinks, 200 sachets of pure water, 500 bags of cement, 2,000 pieces of roofing sheets and other items to help mitigate the plight of residents who were heavily affected by the flood.

The humanitarian gesture follows torrential rains a couple of weeks ago in which hundreds of residents were displaced and rendered homeless by severe floods.

Mr. Cephas Kafui Apenuvor, the Operations Manager of Metropolitan Limited who presented the relief items on behalf of the company to the victims, disclosed why the company saw the need to assist the community.

"We have been working in Ellembelle District and Jomoro Municipality since 2014 and we are now one family and we the contractor constructing the Asasetre to Nzema Akropong road network and since we are working here, we have to give back to the society what we get out of what we are doing. We were informed about the natural disaster that has destroyed your properties and rendered some of you homeless by Ellembelle DCE, Kwasi Bonzoh and we promised to assist you with some relief items", he revealed.

He stated, "We have come here to support you with so many relief items worth GHC250,000 to mitigate your problem. We are one people, your concerns are our concerns, what has happened to you can happen to everybody and it has happened to us, just recently where the flood destroyed the bridge that we are doing on Esiama-Nkroful road so we sympathize with you".

He urged the victims to give thanks to the Chief Executive Officer (CEO) of Memphis Metropolitan Limited, Mr. Patrick Kwame Danso for the kind gesture.

"Let us give thanks to my boss, Mr. Patrick Kwame Danso for thinking you, in fact, he is a man who loves Ghana so much and his love for Ghana has been extended to every human being in this country and the good people of Nzema Akropong are also part", he called.

The Western Regional Minister, Mr. Kwabena Okyere Darko-Mensah who received the relief items on behalf of the victims, commended Memphis Metropolitan construction limited for showing great love to the victims.

He commended the residents who promised him to relocate from their existing place which has been identified as a flood-prone area to a new area to avoid future destruction.

He, therefore, used the opportunity to promise to ensure that all the compensation issues are dealt with.

"Government will pay for every compensation on the new land and I want to assure you", he pledged.

He also said government would connect the new site to the national electricity with other social amenities.

"We will connect the new site to the national electricity, we will provide the new site with toilet, street roads, water system, we will do better layout", he said.

He emphasized that, "We are also preparing ourselves, let me state it here that, government will support anybody who will move to the new site with cements and roofing sheets to build his or her house".

He urge them to continue to have faith in the Akufo-Addo-led government and also rally behind the District Chief Executive of Ellembelle, Mr. Kwasi Bonzoh to develop their community.

On his part, Mr. Kwasi Bonzoh, the Ellembelle District Chief Executive (DCE) expressed his profound appreciation for the Memphis Metropolitan Limited for the kind gesture.

He said the Assembly would support the residents to relocate from their existing place to a new location.

He added that the Assembly alone could not embark on the relocation exercise and therefore appealed to other benevolent companies and individuals to support the Assembly.

He disclosed that, "currently over 500 residents at Nzema Akropong here have been rendered homeless, their houses have been destroyed by the flood, currently they don't have good place to sleep so they need our help, let us all come to their aid".

The caretaker of Nzema Akropong, Tufuhene Kwasi II who spoke on behalf of the community, thanked Memphis Metropolitan Limited for the kind gesture.

He promised to ensure that the relief items reached the affected people.

He also appealed for support for them to relocate from the existing place to a new location.

"We are very ready to relocate, we have agreed but we will need government support and other companies' support, so on behalf of the community, I will appeal to companies and other Ghanaians to come to our aid by supporting us with building materials for us to build our houses on the new land, right now, my people don't have a better place to sleep, the flood has destroyed our houses, we are suffering, we support, please come to our aid", he said.