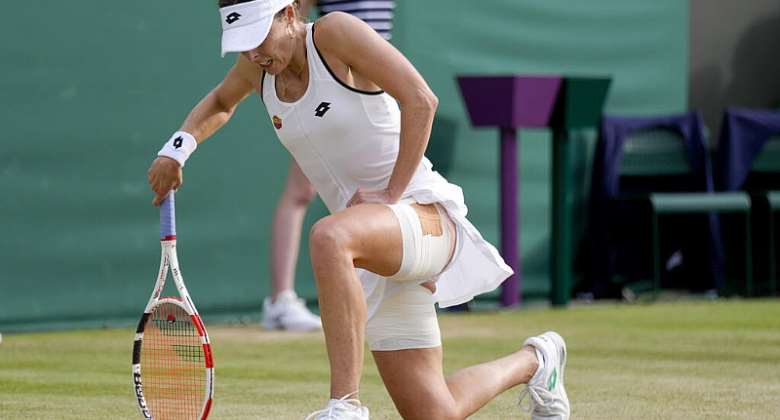 French players Alizé Cornet and Harmony Tan both failed in their attempts to reach the last eight at Wimbledon on Monday.

Cornet lost in three sets to the unseeded Australian Ajla Tomljanovic while Tan, who knocked out Serena Williams in the first round, went down to the 20th seed Amanda Anisimova.

In the third round Cornet accounted for the top seed Iga Swiatek in straight sets. The 32-year-old ended the Pole's 37-match winning run with a gutsy performance displaying the fruits of 15 years on the main tour.

On Monday, she took the early lead against Tomljanovic but was reeled in. However, she broke again for a 5-3 advantage and the chance to serve for the set.

But she fluffled her lines and allowed Tomljanovic to move to within one game with her service to follow.

Tomljanovic, playing in the last-16 at Wimbledon for the second consecutive year, was in equally munificent mood and lost her serve to allow Cornet to take the set 6-4 after 48 minutes.

The start of the second set mirrored the inconsistency at the end of the first.

However, it was Tomljanovic who moved clear for a 4-2 lead and though Cornet recovered to 4-4, Tomljanovic took the next two games to level the match.

There was a further flurry and fluffs. Tomljanovic served for the encounter at 5-2 up but Cornet dug in and made it 5-3.

But she could not force Tomljanovic to serve for the match a second time.

The 29-year-old will face Elena Rybakina after the 17th seed dispatched the unseeded Croatian Petra Martic 7-5, 6-3 to advance to the last eight for the first time.

Comeback
In the men's draw, Christian Garin recovered from two sets and a break down to beat the 19th seed Alex de Minaur.

The 26-year-old Chilean, who also saved two match points, claimed the tie following a final set super tiebreaker to advance to the quarter-finals at a Grand Slam tournament for the first time.

“It was a very tough fight. It was a battle," said Garin after four hours and 34 minutes of combat.

"I think Alex is an incredible player. For me, one of the best on grass.

“I just gave my best. I tried to be aggressive in the tiebreak. I went to the net and was aggressive with my serve. I think that was the key.”

On Wednesday, Garin will play another Australian in the shape of Nick Kyrgios.

The 27-year-old came through in five sets against the unseeded American Brandon Nakashima.

Kyrgios, who received treatment for a shoulder injury, dropped the fourth set but steamed through the decider 6-2 to eliminate the 20-year-old.

The other quarter-final will pit the 11th seed Taylor Fritz against the winner of the match between the second seed Rafael Nadal and the 21st seed Botic van de Zandschulp.

We love Adwoa Safo but it may be too late for her – Dome Kwa...
3 minutes ago

Alan Kyeremanten to answer questions over ‘Aduro wo so’ heal...
3 minutes ago