An Academic Officer at Mampong Nursing and Midwifery Training College lacks comprehension of to be CC’ed….. 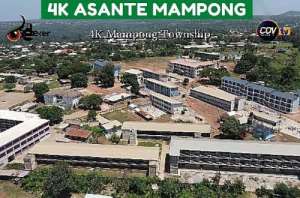 The saga of the “affected”, thus, demoted and dismissed, students, of the Mampong Nursing and Midwifery Training College goes on unabated. The principal of the college, Mrs Gifty Helena Dwamena Amoah, the daughter of Asante Gyamase soil, is mired in utter wickedness to the point of scuppering the future career of young and upcoming students.

She is still unremorseful about how her detected deliberate callousness, unprofessionalism, incompetence, cluelessness and stubbornness coupled with her insubordination to the Minister of Health, have plunged some exuberant students pursuing nursing and midwifery careers into the abyss of total dejection.

Until she changes her attitude to be more professional, fair and firm, she will not be spared the rod now held in the hands of Rockson Adofo, the voice for the voiceless and the fearless, proud and no-nonsense son of Kumawu/Asiampa soil.

This write-up has more to do with the Academic Officers at the Mampong Nursing and Midwifery Training College than having anything to do with the principal.

A letter written following the outcome of their meeting dubbed “recall” with the principal, held on the college campus on Monday, 20 June 2022, was taken to the Academic Office, a department copied into the letter. A female member of the office, exhibiting same deplorable attitude of incomprehension of the functions of the office as does Paul Antiarefa of same tribal extraction, behaved totally clueless about “copied into” (CC’ed).

For the attention of that ignorant Academic Officer, please let me do you the greatest favour of your life by explaining to you what is meant exactly by being copied into a letter or copied in/on email. When you are not the primary addressee or recipient but only cc’ed into the letter or in/on email, you are just being notified about the situation, or an action taken without you necessarily being required to do anything about it. You should not respond to the letter or email unless the writer has stated contrary in the letter or email but which the writer will most often not do.

As time is against me, I will simply inform that bunch of incompetent academic officers who are happy to do otherwise than their office functions permit them to, that “CCing someone in a letter is the conventional way of sending them a copy”.

It is the duty of the primary recipient to answer to such a letter but not those copied in hence the secondary recipients (cc’ed) not having any right to demand the original copies of whichever documents are attached or referred to.

Paul Antiarefa claims it will take him more than one day to prepare an academic transcript for one student. What a load of crap, if he is not a total misfit in that position! His female colleague is also asking for the original document, having been only cc’ed into the letter.

Original documents go to the primary recipient while those copied (Cc’ed) in get copies. (CC=CARBON COPY).

I hope this little explanation will be of immense benefit to the academic officers of the college. What a perfect like mother like daughter or like father like son situation we are witnessing. They have the same obnoxious mentality as the principal.

I shall keep the public in the loop on whatever happens regarding the battle to secure justice for the “affected” students.