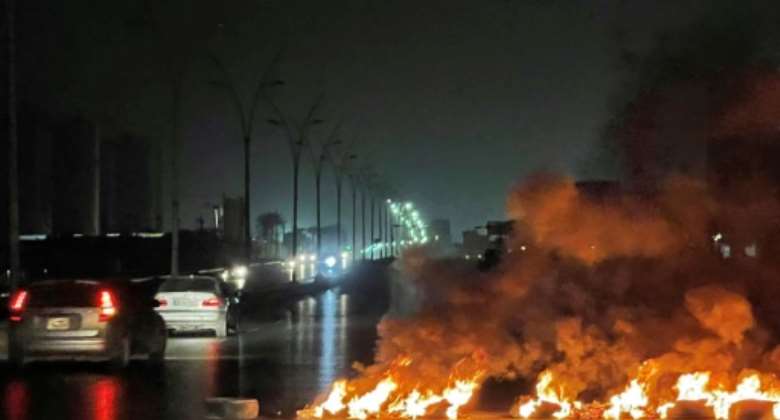 Tyres burnt at a road blockade during overnight protests in the Libyan capital Tripoli. By Mahmud TURKIA (AFP)

Masked youths set alight car tyres and blocked roads including a major coastal highway between central Tripoli and its western suburbs, but security forces did not intervene.

The movement demands elections and the dissolution of both the country's rival governments and their two houses of parliament.

A burnt vehicle outside the House of Representatives in the eastern city of Tobruk, seen on July 2, 2022, after angry protesters stormed the building, ransacking its offices and torching part of it. By - (AFP/File)

The vast country has been mired in political unrest and armed violence since a 2011 NATO-backed uprising toppled and killed dictator Moamer Kadhafi.

On Friday night, protesters stormed the seat of the House of Representatives in the eastern city of Tobruk, ransacking its offices and torching part of the building.

In both Tripoli and the main eastern city of Benghazi, the cradle of the 2011 uprising, thousands took to the streets to chants of "We want the lights to work".

Some brandished the green flags of the former Kadhafi regime.

Libyans protested on July 1 on Martyrs' Square in Libya's capital Tripoli, against the political situation and dire living conditions. By Mahmud TURKIA (AFP/File)

Presidential and parliamentary elections, originally set for last December, were meant to cap a UN-led peace process following the end of the last major round of violence in 2020.

But voting never took place due to several contentious candidacies and deep disagreements over the polls' legal basis between the rival power centres in east and west.

The crisis deepened this year as parliament, elected in 2014 and backed by eastern strongman Khalifa Haftar, appointed a new government to replace that of interim leader Abdelhamid Dbeibah.

He has refused to cede power except to an elected administration.

On top of the political deadlock, Libyans' living standards have been hit hard by price hikes on food imports due to the war in Ukraine.

Meanwhile supporters of the rival administration of former interior minister Fathi Bashagha have shut down several oil facilities since April as leverage in his power struggle with Dbeibah.

Libya expert Jalel Harchaoui told AFP that "kleptocracy and systematic corruption" were rife in both eastern and western Libya.

For normal Libyans however, the year "has been extremely painful" because the country "imports almost all its food and the Ukraine war has hit consumer prices", Harchaoui said.