Are black people capable of managing their own affairs? – Probably No! 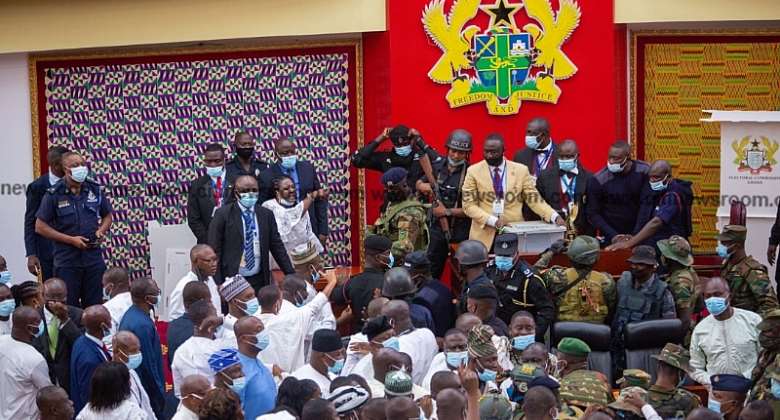 It is on record that the so far most farsighted Ghanaian politician-cum-President, the late ex-President Dr Kwame Nkrumah, had said, “the black man is capable of managing their own affairs”. As visionary as he was, seeing that with him everything was possible, he thought all black people are the same.

He was honest, pragmatic and dreamed big dreams for not only Ghana but the entire continental Africa and the whole of the black race. He believed what the white man has done, a black man can also do, if not much better.

However, the subsequent developments following his overthrown and demise, as regards the management of Ghana and her economy, markedly go to prove that the black man is actually incapable and unable to manage their own affairs.

The development of Ghana, like many other African countries, goes in a repeated cycle of failure and mismanagement caused by the leaders’ absurd infatuation with corrupt practices, malfeasances and short-sightedness. The undeniable evidence out there goes to confirm how narrow-minded, naïve and vulnerable the black man is, especially, the African and particularly, the Ghanaian.

Most Ghanaians by their partisanship and the political polarisation of the country, have to relish in the evil mentality of “pull him down” (PhD); gloating over the downfall of the other.

How on earth should a rational being with enough grey matter in their skull, wish the failure of a government of their country just to pave way for them, or the political party they support, to win power to govern the nation? Will anyone behaving in that manner not be a big fool?

However, that is the mentality of most, if not all, Ghanaians. By so doing, the country and her citizens will never develop to any appreciable level to earn them the respect and admiration by our contemporary white people. We shall forever remain denigrated as a country and a people.

The Ghanaian leadership with most Ghanaians is overwhelmingly corrupt, selfish, insatiably greedy and adore power for all myopic and vainglorious reasons. By this deplorable attitude of the Ghanaian, a black person of course, we can hardly make any inroads into actual development as human beings let alone, building our nation and developing the economy for the collective interests of the citizenry.

When the Ghanaian, in which case the black man, gets power, they start to play the tribal card to cause division and animosity among the various tribes in the country, instead of uniting the people for the prosperous development of the country for the benefit of all.

A clear case to prove how senseless and easily misled the Ghanaians are, is how the minority caucus in parliament and their party and supporters have intentionally resolutely determined, and gone on a tangent, to cause public disaffection for the government. This is meant to bring down the ruling government with the motive of getting the electorate to vote her out to bring their NDC party to power.

By the policies and programmes so far firmly implemented by His Excellency the President, Nana Addo Dankwa Akufo-Addo, the second most visionary leader of Ghana, any person with an iota of sense and brain in their head will agree with me that the president means good for the nation. He has been building a strong foundation for the Ghana economy to take off for the future benefit of all.

Nevertheless, some people yearning for power for all silly reasons, have gone their way to sabotage the president and his programmes.

It is only a Ghanaian exhibiting that level of evil-mindedness that often culminates in the downfall of their country and their very wellbeing as human beings that will embark on that path of action. If they were not stupid and without the capability to govern themselves as human beings endowed with wisdom, will they do that in the first place?

Anyway, I will not go any further but to ask my fellow Ghanaians to read how correctly the black man was described by the late White President of South Africa, the champion of apartheid, Pieter Botha. All that he said about the black man in 1988, has since remained the absolute truth. 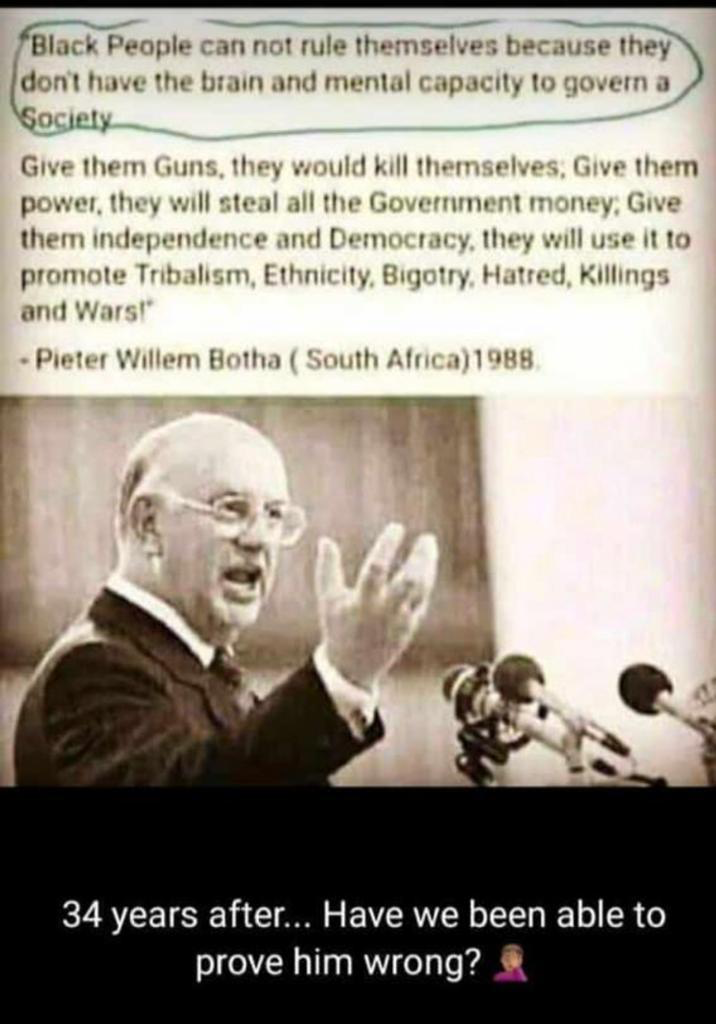 It hurts to tell the truth but, in the end, it brings comfort. When the truth said does not go your way, you may think the person saying it is a racist, especially, when said by a white person to a black person, however, the person is even helping you. For it is said, if you are at the bottom rung of a stepladder but think you are on top of the ladder, you cannot climb any further but rather climb down. Nevertheless, if you are at the bottom rung of the stepladder and do acknowledge where you are, you will aspire to climb up.

Ghana is failing because it is full of black people who behave stupidly devilishly as perfectly described by Pieter Botha.

Why have such negativities, thus, selfishness, love of corruption, greediness, tribalism, partisanship, etc., as damaging as they are, become intrinsic to the black man?

Until we change our bad attitudes to behave as rational human beings, the Ghanaian, in which case it is the black man, is doomed forever.