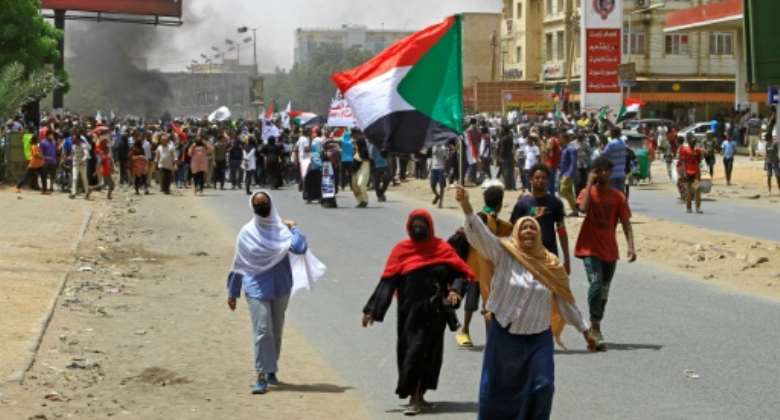 Sudanese anti-coup protesters march during a demonstration in Omdurman, the capital Khartoum's twin city, on June 30. By - (AFP)

Hundreds of Sudanese protesters demanding an end to military rule took to the streets of the capital Khartoum and its suburbs for a fourth straight day Sunday, witnesses said.

A violent crack down by the security forces during mass rallies on Thursday killed nine people, the deadliest day for several months in the long running protests against a military takeover last October led by army chief Abdel Fattah al-Burhan.

Demonstrators demand a restoration of the transition to civilian rule that was launched after the 2019 ouster of longtime autocrat Omar al-Bashir, which the coup derailed.

The death toll from protest-related violence has reached 114 since last year's coup, with the latest fatality recorded Sunday when a demonstrator died from wounds sustained at a June 16 rally, according to pro-democracy medics.

The coup plunged Sudan further into an political and economic turmoil which has seen rising consumer prices and life-threatening food shortages.

On Sunday, witnesses reported a heavy deployment of security forces on the streets of Khartoum, including both army vehicles as well as those of the Rapid Support Forces (RSF), a feared paramilitary unit commanded by Burhan's deputy Mohamed Hamdan Daglo.

The RSF incorporated members of the Janjaweed militia, which was accused by rights groups of atrocities during the conflict that erupted in 2003 in the western region of Darfur.

More recently, the RSF has been accused of taking part in crack downs on protesters marching against the army.

The international community has condemned the recent bloodshed, with the United Nations' rights chief urging an independent probe into Thursday's violence.

The UN, African Union and regional bloc IGAD have tried to facilitate talks between the generals and civilians, which the main civilian factions have boycotted.

On Friday, the three bodies jointly condemned the violence and "the use of excessive force by security forces and lack of accountability for such actions, despite repeated commitments by authorities".