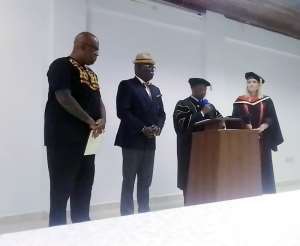 The event which attracted high foreign diplomats is aimed at improving the living standards of citizens across the African continent geared towards achieving a sustainable economy.

Speaking during the lecture, the chairman of the group, Dr Worlanyor Mensah stated that the economic achievement of a country depends solely on political intelligence, hence the objectives of the group.

"We've realized that most of our social and economic engineering has to do with political and so for some years now, Ghana, for that matter all other African countries achieved independence but realized that it only political independence but I believe that it is time to take the bull by the horns, profess solutions and that will really help us to harness our social orientation," he stated.

He believes that in order to achieve a sustainable economy and progress, governments of Africa need to adapt to a systematic approach.

Touching on the current inflation rate, he stated that values need to be added to resources, ideas and innovations across all sectors.

He also stressed the improvement and industrialization of the agricultural sector and technology. He noted that expansions of the oil sector would also boost the economy.

The chairman, however, acknowledged the President, Nana Akufo-Addo for the idea of digitizing the economy but stated that in order to achieve that, it takes proactive processes and steps.

Dr. Prince Coda, a former artificial intelligence expert at the United Nations in his remarks noted that the African continent has the resources and technological ideas to promote and develop its natural resources.

"Africa has the materials and resources to choose strategic positions, the equator of the Greenwich meridian pass through Ghana and I believe that the renaissance of the world also axes towards us and for that matter let's keep the hope alive," he said.

On his part, Dr. Nelson Noel, a presidential aspirant of the Republic of Haiti stated that his country has achieved a lot through industrialization and technology.

He revealed his country's readiness to collaborate with other countries on the African continent and Europe to ensure successful development.

As part of the lecture, Okatakyie Asafo Boakye (III), known in private life as Samuel Bervell Ackah, king of Sanzule in the Eastern Nzema District of the Western Region was honoured with a doctorate degree of Philosophy in Humanities by the United Graduates, College and Seminary International, USA.

The honour was conferred on him due to his exemplary leadership qualities, educational input, and philanthropic activities among others.

His role as a king of Sanzule saw the unification of his people to ensure progress and development.

In his remarks, Okatakyie Asafo Boakye III acknowledged the centre for the honours. He expressed gratitude to the organisers.

He recalled the positive impacts of his family, the people of Sanzule and other stakeholders in his life.