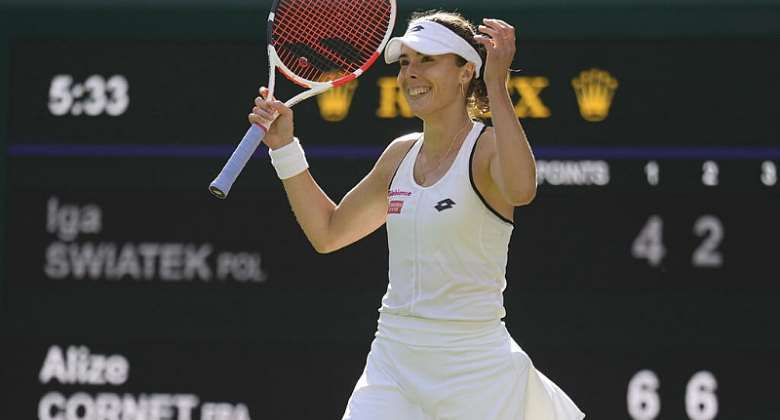 French number one Alizé Cornet on Saturday terminated the 37-match winning run of the world number one Iga Swiatek with a straight sets victory to move into the last-16 at Wimbledon.

"I am a huge fan of Iga, she's such an amazing player and a nice ambassador," said Cornet.

"This is the kind of match I am training for, it drives me."

Cornet, who reached the last eight at the Australian Open in January, refused to be cowed by Swiatek's record run dating back to February during which she had harvested titles on the hard courts in Doha, Indian Wells and Miami and on the clay in Stuttgart, Rome and Paris.

But the 21-year-old opted not to feature in a grass court event before Wimbledon.

Experience
And Cornet, playing in a record-equalling 65th consecutive Grand Slam tournament, exposed the Pole's lack of experience throughout.

Even when she went a break down in the second set, Cornet maintained her aggression and rolled through six consecutive games to post a famous victory.

"It's a really nice feeling now," Cornet added. "I need to process. In France they say a good one always ages well and that's what has happened to me.

"I am playing one of the best seasons of my career. I am still motivated, I have the fire in me."

In the last-16, Cornet will play Ajla Tomljanovic. The world number 44 saw off the 13th seed Barbora Krejcikova in three sets to reach the last-16 for the second consecutive year.

Cornet will also join her compatriot Harmony Tan.
The 24-year-old accounted for Serena Williams in the first round on Tuesday.

On Saturday, she dispatched the British player Katie Boulter 6-1, 6-1.

Tan, who is making her debut in the main draw at Wimbledon, will take on the 20th seed Amanda Anisimova who beat the 11th seed Cori Gauff 6-7, 6-2, 6-1 to move into the last-16 for the first time at Wimbledon.