NPP takes Ghana to IMF same as NDC did, therefore, the value of their management of the Ghana economy is the same! 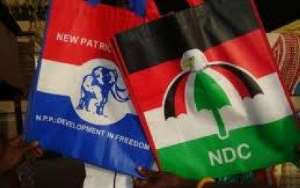 The NDC must be in total jubilation over the announcement of President Nana Akufo-Addo’s intention to take Ghana to the International Monetary Fund (IMF). It is the obvious understanding by many a person that a country needing a bailout of their economy that has plunged into the abyss, or on the brink of plunging into the abyss of bankruptcy, goes to the IMF for help.

In that circumstance, that country has triggered the alarm bells for the management of their economy by IMF.

The IMF always prescribes hard to swallow concoction for that country. They come in with their tough economic conditionalities that often worsen the plight of the country gone to them for financial assistance. Empirical observations have proven my assertions right.

However, to rubbish any mischievous jubilation and mockery of the NPP by the NDC, in the sense of evoking equalisation to justify that both parties, or governments, have run to the IMF for help due to their mismanagement of the Ghana economy, hence their value being the same, the big mind Rockson Adofo wishes to wade into the issue to set the record straight.

Rockson, who loves using analogies or parables to home in his messages so as to make things easily assimilated even by the little-minded persons, will explain the situation thus; “all die be die” but with exception. Right?

Mr “A”, a persistent quick tempered husband in an argument with his wife over his alleged infidelity, pushed the wife out of his way as he was running late to get to work. The wife was obstructing him from leaving home for work until she had satisfactorily made her point clear. The man could no longer withstand the wife hindering him from leaving home for work so he ended up pushing her hard out of his way.

The wife fell over with her head hitting the floor. She suffered concussion that led into other complications. She was rushed to the hospital but died three days later.

Had Mr “A” not caused her fall, the wife would not have suffered any head or brain injuries to culminate in her death. At this point, he has committed murder. He has killed his wife.

Did he cause this murder with intent? No. However, murder has been caused.

When arraigned, charged with murder, he pleaded guilty to manslaughter and was given a lighter jail sentence.

In another scenario, a man gathers his sycophantic followers, coaches them to go out to murder people to cause public disaffection for his rival political party ruling the nation. By his action, he wants the electorate to vote out the president to bring him in. He supplied them with shotguns. He led them to ambush a certain dignitary, took him to some bush and shot him dead.

In both situations, someone has died. Murders have been caused.

Nevertheless, in the second scenario, the perpetrators of the crime were charged with first degree murder, tried and sentenced to death.

Have murders not been committed in both situations? Why has one received a lighter prison sentence and the other a death sentence?

In the first case, the death was caused without premeditation but accidentally. In the second case, it was planned and executed hence the difference in the sentencing as stated above.

Similarly, the NDC under former President John Mahama took Ghana to IMF out of pure mismanagement of the country and the economy; awarding government contracts at exorbitant costs to the nation with arrangements to receive kickbacks, etc. Under the NPP, the devastating Covid-19 pandemic that nearly collapsed most worldwide economies and the current ravaging war between Russia and Ukraine, have brought untold financial hardships on the country.

Subsequently, Ghana had better go to IMF for financial assistance. The two situations that culminated in Ghana seeking assistance from the IMF are not the same.

I had decided not to do any politics for any political party anymore but for this malevolent equalisation by the NDC on intent to win political power with John Mahama coming back to deplete the coffers of the nation for his selfish and insatiable greed, I will rescind my decision, pull back my sleeves and ready for taking the NDC on in a mission to win the heart and souls of the Ghanaian electorate to vote for a farsighted leader and party but not visionless one that believes in violence and “create, loot and share” of the national assets and funds.

Come, all ye that lack wisdom and truth, to drink freely from the overflowing fountain of political strategies, wisdom and truth, of Rockson Adofo, the proud, fearless and no-nonsense son of Kumawu/Asiampa soil.

More to follow on this story of Ghana going to the IMF under President Nana Akufo-Addo, the similitude of biblical Moses, Joseph or David in modern day Ghana.

“The battle is still the Lord’s.