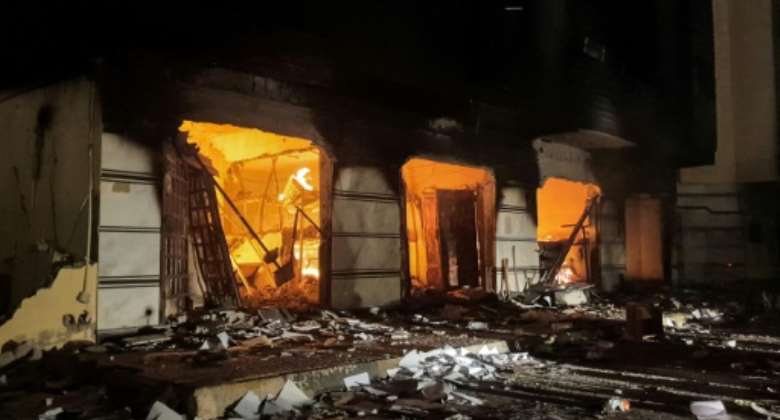 Protesters set a blaze in Libya's Tobruk-based parliament while demonstrating against deteriorating living conditions and political deadlock. By - (AFP)

Protesters stormed Libya's parliament in the eastern city of Tobruk on Friday and set parts of it ablaze, venting their anger at deteriorating living conditions and months of political deadlock.

Black smoke billowed as men burned tyres and torched cars after one protester had smashed through the compound's gate with a bulldozer and others attacked the walls with construction tools, local media reported.

The building was empty, as Friday falls on the weekend in Libya.

Libya's House of Representatives has been based in Tobruk, more than 1,000 kilometres (600 miles) east of the capital Tripoli, since an east-west schism in 2014 that came three years after a mass popular revolution toppled dictator Moamer Kadhafi.

A separate legislature, formally known as the High Council of State, is based in Tripoli as the oil-rich North African country remains divided between rival administrations vying for control.

"We want the lights to work," chanted protesters, some of whom were brandishing the green flags of the Kadhafi regime. By - (AFP)

Libya, sweltering in summer heat, has endured days of power cuts -- a situation worsened by the blockade of key oil facilities amid the entrenched political rivalries.

"We want the lights to work," chanted protesters, some of whom were brandishing the green flags of the Kadhafi regime.

The parliament condemned the "acts of vandalism and the burning" of its headquarters.

The interim prime minister of the Tripoli-based government, Abdulhamid Dbeibah, meanwhile voiced support for the protesters' concerns in a Twitter message.

The two governments have been vying for power in Libya for months: the one based in Tripoli, led by Dbeibah, and another headed by former interior minister Fathi Bashagha, appointed by the parliament and supported by eastern-based strongman Khalifa Haftar.

Presidential and parliamentary elections, originally set for last December, were meant to cap a UN-led peace process following the end of the last major round of violence in 2020.

Libyans on Friday gathered in Tripoli to protest against the political situation and dire living conditions. By Mahmud TURKIA (AFP)

But the vote was never held due to several contentious candidacies and deep disagreements over the polls' legal basis between the rival power centres.

The United Nations said Thursday that talks between the rival Libyan institutions aimed at breaking the deadlock had failed to resolve key differences.

Parliament speaker Aguila Saleh and High Council of State president Khaled al-Mishri met at the UN in Geneva for three days of talks to discuss a draft constitutional framework for elections.

While some progress was made, it was not enough to move forward towards elections, with the two sides still at odds over who could stand in a presidential vote, said the UN's top Libya envoy Stephanie Williams.

The prospect of elections appears as distant as ever since the parliament appointed Bashagha, arguing that Dbeibah's mandate had expired.

After Bashagha failed to enter Tripoli in May, the rival administration has taken up office further east in Sirte, Kadhafi's coastal hometown.

Libya's parliament, or House of Representatives, has been based in Tobruk, 500 kilometres east of the capital Tripoli, since an east-west schism in 2014, following the revolt that toppled dictator Moamer Kadhafi three years earlier. By - (AFP)

Recent weeks have seen repeated skirmishes between armed groups in Tripoli, prompting fears of a return to full-scale conflict.

Demonstrators rallied in other cities on Friday including Tripoli, where protesters held up crossed-out images of both Dbeibah and Bashagha.

"Popular protests have erupted across Libya in exasperation at a collapsing quality of life, the entire political class who manufactured it, and the UN who indulged them over delivering promised change," tweeted Tarek Megerisi of the European Council on Foreign Relations.

"Things are escalating quickly and the response will define Libya's summer."

Libya's National Oil Corporation announced on Thursday losses of more than $3.5 billion from closures and declared force majeure on some sites, a measure freeing it of contractual obligations due to circumstances beyond its control.

A drop in gas production has contributed to Libya's chronic power cuts which can last around 12 hours a day.