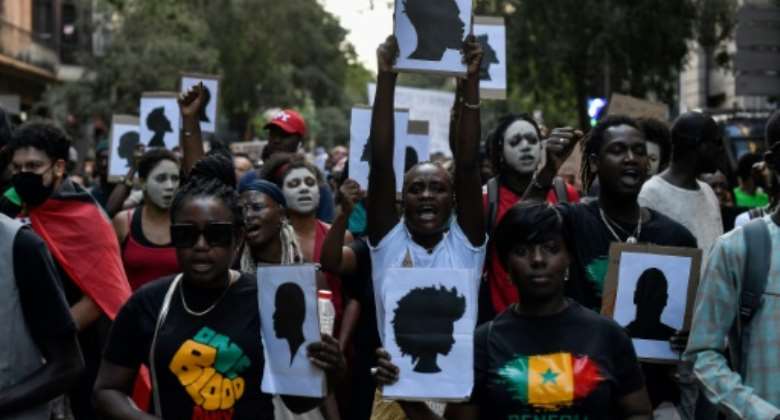 Thousands of protesters rallied in Barcelona and other Spanish cities to demonstrate over the migrant deaths. By Pau BARRENA (AFP)

Demonstrators held rallies in several Spanish cities and in Rabat late Friday to protest over the deaths of 23 African migrants who died in a crush trying to enter the Spanish enclave of Melilla in northern Morocco.

Thousands of protesters gathered in Barcelona, Malaga, Vigo and San Sebastian and in Melilla itself to denounce migration policies and the "militarisation of borders".

In the Moroccan capital, a few dozen representatives of the Collective of Sub-Saharan Communities in Morocco and associations helping migrants demonstrated in front of parliament calling for Rabat to "stop playing the role of EU policeman".

"We demand an end to the migration policy funded by the European Union, the opening of an independent investigation and the return of the bodies to the families," activist Mamadou Diallo told AFP.

Facts and locations of the Spanish enclaves of Ceuta and Mellila in Morocco.. By (AFP)

"The Europeans colonised us and took everything from us to develop. Today, if we go to them, it means that we have the right to leave," he said.

Moroccan prosecutors have initiated proceedings against 65 migrants, mostly Sudanese, accused of having taken part in the mass attempt to enter Melilla from Morocco a week ago.

At least 23 migrants died when around 2,000, mostly from sub-Saharan Africa, tried to break through the fence into the Spanish enclave, according to Moroccan authorities, while NGOs say at least 37 lost their lives.

The death toll was by far the worst recorded in years of attempts by migrants to cross into Spain's Ceuta and Melilla enclaves, which have the EU's only land borders with Africa, making them a magnet for those desperate to escape grinding poverty and hunger.

The tragedy has provoked international indignation, including an unusually strong response from the United Nations, and the opening of investigations by Spain and Morocco.

In Madrid, several hundred people took up the slogans of the "Black Lives Matter" movement and chanted "No human being is illegal!" and held up signs that read: "Borders kill."

Demonstrators also rallied in the Moroccan capital Rabat calling for an investigation. By - (AFP)

"This country makes me ashamed," said Carmen Reco, 77, attending the protest after this "injustice which resulted in the murder of migrants because they were trying to enter Spain".

Renzo Rupay, who works in transport, said he was shocked by "the images of the border".

"I too am a migrant, arrived with a child's travel papers. Not everyone has the possibility of arriving legally in Spain," the 28-year-old said.

"It's not normal that so many people die. We're talking about human lives, people fleeing war and we kill them at the border," said Eva Ruiz, a 24-year-old student.

According to Rabat, the victims died "in jostling and falling" from the top of the metal gate that separates Morocco from Melilla during an attempt to storm the border "marked by the use of very violent methods on the part of migrants".

But images quickly emerged that "show bodies strewn on the ground in pools of blood, Moroccan security forces kicking and beating people, and Spanish Guardia Civil launching teargas at men clinging to fences," according to Human Rights Watch.

The migrant rush in Melilla came after Madrid and Rabat normalised their diplomatic relations following an almost year-long crisis centred on the disputed Western Sahara territory.

For Spain, the main objective of the diplomatic thaw was to ensure Morocco's cooperation in controlling illegal immigration.

Hottest Photo Reports
Catch up with all the political quotes from our politicians.
Advertise here
More from Morocco
ModernGhana Links
Drought tightens its grip on Morocco
French court suspends the deportation of conservative imam to Morocco
8 months' jail for 14 migrants in Morocco: lawyer
TOP STORIES