Tottering On The Brink Of The Abyss: The Wind Of Change Is Blowing. 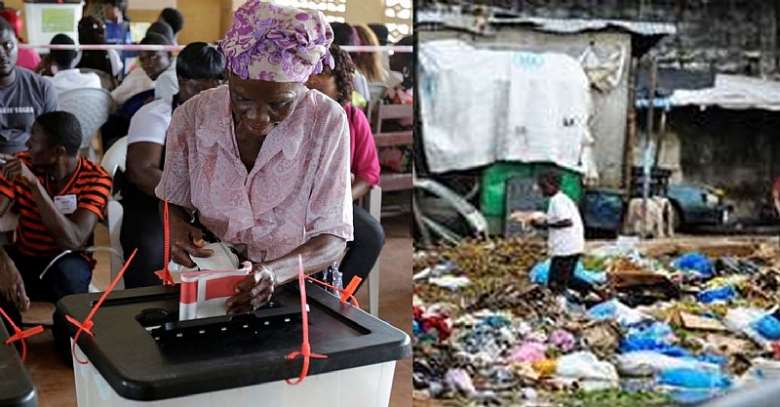 The discredited regime is once again on the verge of sapping the will of the people of Lofa County, the resolve of the progressive people of Lofa to offer to the regime not a “Pro-choice Senator” has earned for them the devious machination of the failed cabal. “Lofa bleeds Blue” “Lofa has fallen” “It’s over”. The gung on expressions on the part of enthusiasts of the regime have morph into catch-21for enthusiasts of the ruling establishment let alone the establishment itself just three hours after the reading of 84% of the Senatorial Election results emanating from Lofa County. With the preponderant nature of the evidence which implicates the regime beyond reasonable doubt of electoral malpractice originating from the website of the National Elections Commission, where the regime endorsed candidate has to his credit, votes that are not reflective of the people’s will, in some instances, the NEC allotted to him votes that surpass the actual number of registered voters, in another, the sum of his votes are greater than that which he actually acquired (Precinct 21005, Polling Place One, he obtained 148 while in Polling Place Two, he obtained 127 but in sum, his votes are 550).

The National Elections Commission could not withstand the contradictions on its own website which prodded it to shut-down the site just after the release of the first batch of results. This act undresses the regime and shows nicked its desperation to prove to the Liberian people and the world that Lofa has fallen which would then unburden them in their pursuit to stage manage the 2023 process. But again, this act also shows the degree at which the masses abhor the maladjusted regime, presided over by a soccer dolt and assisted by a consignment of academic reprobates.

With just fifteen month left for the conduct of the nation’s fourth post-war General and Presidential Elections, the scene is already one of eery for the ruling establishment, thus obfuscating its chances of retaining the nation’s most sacred seat. The masses are not taking their survival for granted, just after bruising the ruling Coalition for Democratic Change in the Mid-term Senatorial elections, the regime has not had the chance to nurse it wounds, the masses have once again struck a blow, this time, deep into the lung of the regime. After losing that which has been long tagged as its stronghold, Montserrado County, to the once disharmoniously amalgamated opposition, the Collaborating Political Party (CPP) to encompass thirteen other seats in the upper house (Senate) during the Mid-term Senatorial elections, the system has not been able to regain its lost image.

After three years into the six years’ tenure of the regime, with the intractable contradictions which have inundated the Weah’s government, it’s overt that he would not bear the prefix “His Excellency” after 2023. The elongation of the president’s tenure is now threatened by perennial corruption, unmitigated suspicious deaths, skyrocketing food prices, balloon gasoline and fuel prices, unceasing infliction, etc., thereby making life intolerably pugnacious to live in Liberia. Every organ of the republic has been plagued by terror, infamy and debauchery, many believe that the election of George Weah was an invitation extended to poverty and dissipation in a republic were life was worthy of living former years.

Many nationalists and convicted patriots of the intellectual class, questioned in good faith, the scholarship of this retired soccer legend when he first made public his intention to lead a nation fresh from war in 2005. Their askance of this infamous presidential material was not made out of hate, they saw the transformation of the republic as a supreme responsibility of every Liberians, thus igniting their consciousness and skepticism of every characters who presented themselves as agents of change, for the recluses who chose to alienate themselves from any theoretical enlightenment, they harbored the view that education was not a precondition for an effective and efficient leadership in a challenged republic, it’s this class aided by the egotistic incumbent that landed the republic to the brink of this rancid abyss in 2017.

This class not being savvied that politics, as with any field of knowledge, needs a sense of proportion. One cannot be a professional neurosurgeon without a basic knowledge in Biology; and so is leadership. Leadership, as oppose to the understanding of Mr. Weah and his parasitic tabula rasa lieutenants, is understanding current events and developing perspectives for the most likely course of future events, which requires theoretical underpinning. Since this was not a unique standard for determining a presidential material in 2017, the Liberian state has become a paradise for indiscreet characters whereby merit has been considered as an exception instead of a rule under the aegis of a devious despot accompanied by pathetic imbeciles just after five year of governance.

The change as espoused to the Liberian people in the heat of the 2017 General and Presidential Elections has become an illusory, the change, when one tries to give it an objective assessment, it would basically be found in the personal lives of those occupying bureaucratic posts within the system. The president is now the owner of estates, resorts, SUVs, etc., whilst Paris and other captivating cities in Europe and America have now become the ideal destinations for the satisfaction of expensive lifestyles for individuals would could not afford leasing a single bedroom apartment years before 2017, Champaign has become the detergent for car washing, in sum, the competition now between the president and his cabinet members is one deeply entrenched in poverty ownership. Leadership, under the CDC fascist regime, has everything to do with primitive material accumulation as oppose to selflessness, dedication to an idea, and strong conviction of social justice.

CAN THE MASSES DISCOVER THEIR OWN STRENGTH AND ACQUIRE THE CONFIDENCE NECESSARY TO FIGHT TO THE END?

To this inquiry, we answer in the affirmative. We are aware that in the struggle for the attainment of life’s necessities, the masses will wager, they will place their destiny in the hands of varying ideas. History teaches that, the usefulness of any body of ideas is cued by its outcomes. During this wagering process, some ideas will have the faculty to excavate the ebbs and flows of societal impasses and chart a course for changing history and some with daring passion for vanity projects, would use the purse of the republic to source initiatives that better not the republic and its people but the self and such best describes the current order in Africa’s oldest republic. Between these two, stands the masses, who have the human power to alter the course of history. This class whose consciousness is determine not by theoretical enlightenment but life experience, has the ability to fight to the end. The happening in Lofa County is a classic example to derive at a scholarly conclusion that the masses with confidence, can take their destiny in their own hands and express in banner-size that all powers are inherently vested in them.

The masses are capable of detecting the deficiencies of those accidental figures who appear as campaigners of social justice and economic freedom, in the case of the current economic scavengers hopscotching as public servants, the mid-term senatorial election and the current Lofa County process are a foretaste to what we expect to unravel 2023. There is nothing more legal and moral than a people destined for the attainment of socioeconomic dignity, just as it is legal and moral, so it can be nefarious and brutal, when the adversarial force becomes anathema to such advancement, a caveat to the dogmatic analysts who bear the banal thoughts that the regime would clinch unto power against the will of the Liberian masses in succeeding elections with emphasis on the presidential election comes 2023.

The masses are cognizant that the Coalition for Democratic Change government cannot alter itself neither are they willing to be dictated to on the terms of its eviction. The people are firm, unyielding and principled in their opposition to the failed and discredited regime of the ex-soccer star, what now stands in between the regime on one hand and the people on the another hand for the marching order of exit is fifteen months. YES! Fifteen months, and this organization that was created on the back of the masses to change the Liberian society but in the end morphs into a monstrous obstacles in the path of progress to be made history.

Latest Photo Reports
Catch up with all the political quotes from our politicians.
Advertise here
More from Article
ModernGhana Links
Staff shortage remains a bottleneck in viral hepatitis services
Electoral Commission hints at using Ghana Card for registration of voters going forward, a novelty or an idea the NDC has long thought about?
Exploring The Potential For Citizen Participatory Practices In Environmental Decision-Making In Mining Communities In Ghana
TOP STORIES

'Forgive me if I was wrong to spearhead renovation of Asomdw...
18 minutes ago