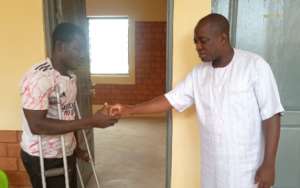 The Tempane District Chief Executive (DCE) Issaka Anabida has commissioned a housing facility at Kugzua as part of the relocation for houses affected by the construction of the multipurpose irrigation dam at Tamde.

According to the DCE, the said facility is for the Tengindana of the community.

However, expressing gratitude for the kind gesture, a beneficiary thanked the DCE and government for responding to their calls.