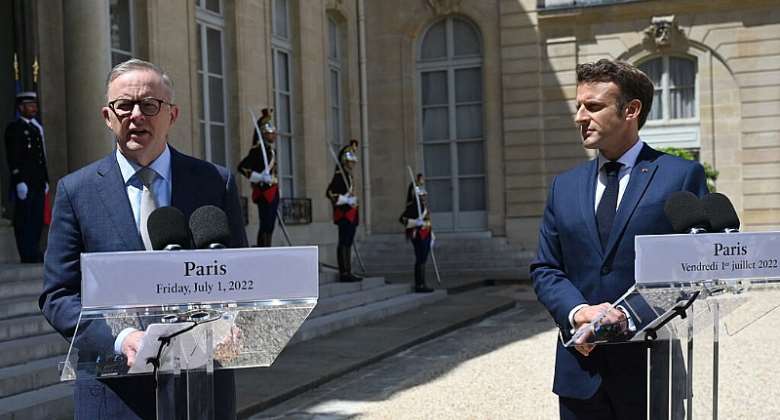 Australian Prime Minister Anthony Albanese welcomed a "new start" in relations with France as he met President Emmanuel Macron in Paris on Friday, following an acrimonious row between the countries over a submarine contract last year.

"My presence here represents a new start for our countries' relationship," Albanese said after arriving at the Elysee Palace.

"Australia's relationship with France matters. Trust, respect and honesty matter. This is how I will approach my relations."

Macron said that Albanese's recent election and the first conversations between the pair marked "a willingness to rebuild a relationship of trust" between the two countries based on "mutual respect".

After acknowledging "difficult times", Macron emphasised France and Australia's strategic partnership, their shared war history in Europe and their joint interests in having stability in the Indo Pacific.

The statements, which followed a warm greeting between the two men and their wives in the courtyard of the presidential palace, mark a seachange in ties since the departure of former Australian prime minister Scott Morrison.

Macron was left furious last year after Morrison secretly negotiated to buy US-designed submarines and then ditched a landmark submarine contract with France worth €33 billion euros when it was signed in 2016.

France broke off diplomatic contact with Australia, and Macron repeatedly accused Morrison of having lied to him during a dinner they had in Paris in June 2021.

Morrison's actions were marked by "brutality and cynicism", Le Dran said in May, adding they even smacked of "unequivocal incompetence".

Albanese announced earlier this month that French submarine maker Naval Group had agreed to a "fair and an equitable settlement" of €555 million in compensation for Australia ending the decade-old submarine contract.

"It is important that that reset occur," Albanese told national broadcaster ABC in an interview on 24 June.

No insurance package for commercial 'pragya' operators - NIC
25 minutes ago