By Committee to Protect Journalists
Somalia 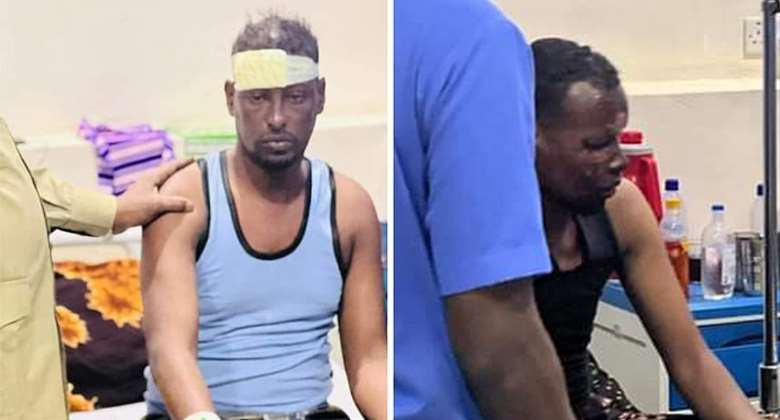 Somali journalists Khalid Mohamud Osman (left) and Abdikarin Mohamed Siyad (right) are seen in a hospital after being injured in an explosion. (Photo: Hirshabelle TV)

Somali authorities should immediately and thoroughly investigate the explosion that killed three people and injured journalists Abdikarin Mohamed Siyad and Khalid Mohamud Osman, and hold those responsible to account, the Committee to Protect Journalists said Friday.

On Monday, June 27, a vehicle carrying the journalists along with government and military officials was damaged by an explosive device in the town of Qabno, in Somalia’s central Hiiraan region, in Hirshabelle state, according to multiple media reports, a tweet by the Federation of Somali Journalists, and a joint statement from the local press freedom groups Somali Journalists Syndicate (SJS) and the Somali Media Association (SOMA).

Those reports alternatively refer to the explosive device as a roadside bomb and a land mine. CPJ was unable to immediately determine the nature of the device.

Three soldiers were killed in the explosion, and Abdikarin and Khalid, reporters with the state-owned Hirshabelle TV broadcaster, were injured, according to those sources and Hirshabelle Minister of Information, Culture, and Tourism Mohamed Abdirahman, who spoke to CPJ via messaging app.

The journalists were covering a military campaign against the militant group Al-Shabaab at the time of the attack, Mohamed told CPJ. He said the journalists were “doing well” and had sustained some injuries to their faces but did not have any broken bones. No one has claimed responsibility for the attack, according to those sources.

“The constant threat of physical attack looms dark over Somali journalists, and the only way to assuage these fears is to root out impunity and ensure accountability whenever a journalist is harmed in the course of their work,” said CPJ sub-Saharan Africa Representative Muthoki Mumo. “Authorities should credibly investigate the injuries sustained by journalists Abdikarin Mohamed Siyad and Khalid Mohamud Osman in a recent explosion, as part of broader efforts to guarantee safety for journalists in Somalia.”

On Monday, the two journalists were taken to the town of Guri El, in central Galmudug state, and on Tuesday were evacuated to the Somali capital of Mogadishu for further medical attention, according to Mohamed and news reports.

Hirshabelle police spokesperson Diini Roble told CPJ via messaging app that police were “working to know the people behind this bombing.”

On Wednesday, Hirshabelle Vice-President Yusuf Ahmed Hagar visited the two journalists at Kalkaal Hospital in Mogadishu and promised to cover all expenses they incurred while hospitalized, Osman said.

'Forgive me if I was wrong to spearhead renovation of Asomdw...
24 minutes ago