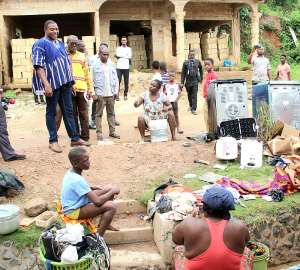 The Municipal Chief Executive for Obuasi Honorable Elijah Adansi-Bonah has visited some communities in the Obuasi Municipality which were hard hit by flood after a heavy downpour on Wednesday 29th June, 2022.

The Minister and his team which included officials from the National Disaster Management Organisation (NADMO) and the Works Department, visited Cofkans Hotel, Bidiem, Nyameso, Bogobiri and Kunka.

Hon. Adansi- Bonah commiserated with the victims who had lost valuable items and assured them that the Assembly has put in place measures to deal with flooding in the Municipality.

In his interactions with the media, the MCE said the only way the Assembly can permanently deal with flooding in Obuasi is to construct more drains in the Municipality. He said population increase and urbanisation have contributed in putting excessive pressure on the environment.

Consequently, he said, the Assembly has to commit more resources to construct more storm drains to nip the situation in the bud.

"As you may be aware, the Assembly has started constructing some drains through the Secondary Cities Support programme. So, far, we are on the verge of completing forty-percent (40%) of proposed drains to be constructed. This is not enough so we are determined to put more resources through our subsequent budgets, to construct more drains in Obuasi."

MCE calls for attitudinal change towards disposal of waste

He called on residents to change their attitudes regarding how waste is dumped in drainages meant to enhance stormwater flow.

He added that whiles the Assembly is working hard to prevent flooding by constructing drains and bridges, the people must complement their effort by adopting appropriate waste disposal habits.

He further expressed the resolve of the Assembly to deal with those who dump refuse indiscriminately.

The Assistant NADMO Coordinator of Obuasi Municipal, Bright Nyampong said his outfit is currently taking stock of what has happened and will report to their Regional and National offices.

He again mentioned that NADMO has never relented in educating people to put in place safety measures and guard against attitudes that will result in flooding and other natural disasters.

Mr. Nyampong also added his voice to calls for people to change their attitudes regarding indiscriminate waste disposal practices.

So far, no casualties have been recorded however, people have reported loss of properties and other valuable items whiles others have been displaced.