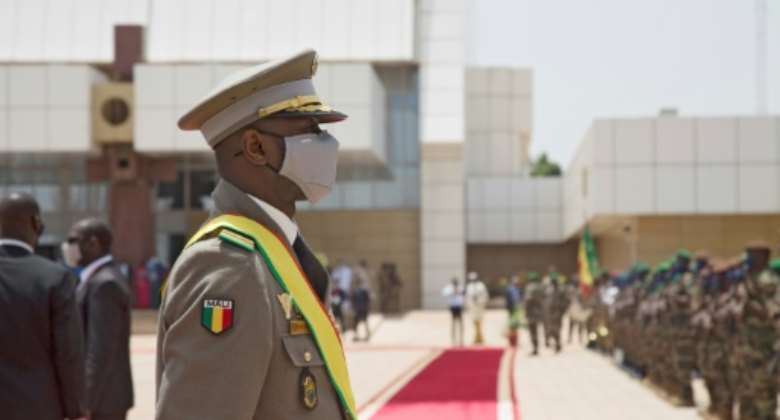 Mali's interim president, Colonel Assimi Goita, took power at the head of a junta in August 2020. By ANNIE RISEMBERG (AFP)

West African leaders on Sunday will weigh the future of sanctions imposed against three countries where the military have seized power, sparking concern for stability in one of the world's most coup-prone regions.

The Economic Community of West African States (ECOWAS) has slapped tough economic and financial sanctions on Mali and less severe penalties on Burkina Faso and Guinea.

In a one-day summit in the Ghanaian capital Accra, ECOWAS will decide whether these measures should be maintained, strengthened or lifted.

At the core of their talks will be the bloc's demand that the juntas set an early timetable for returning to their barracks.

Mali, a poor, landlocked country in the grip of a decade-long jihadist conflict, has been under a trade and financial embargo since January, a move that has badly strained its economy.

Burkina Faso -- another Sahel country caught up in jihadist turmoil -- and Guinea have so far only been suspended from the bodies of the 15-nation bloc.

The three states underwent four coups in 18 months: two in Mali in August 2020 and May 2021, one in Guinea in September 2021 and one in Burkina Faso in January this year.

Alarmed by the risk of contagion, ECOWAS has stepped up top-level meetings and piled pressure on military rulers to accelerate the return of civilian leadership.

On June 4, the bloc avoided ruling on sanctions and instead gave itself another month to negotiate.

Bitter talks between ECOWAS and Mali's junta have been underway for months.

A source close to Jonathan told AFP that "Mali has made enormous progress."

Though there are still "some adjustments to be made," the Malian junta "is doing a good job" on the issue, the source added.

The junta in January had triggered the sanctions by unveiling a scheme to rule for five years.

But on Wednesday, the authorities in Bamako approved a plan to hold presidential elections in February 2024, preceded by a referendum on a revised constitution in March 2023 and legislative elections in late 2023.

On June 17, the authorities approved a new electoral law, something that is also likely be viewed positively by ECOWAS.

However, a potential sticking point is that the legislation allows military candidates to contest the presidential ballot.

In Burkina Faso, ECOWAS is concerned about the 36-month transition period the military rulers announced.

But it has appointed a high-powered mediator, former Niger president Mahamadou Issoufou, and a diplomat from the region told AFP, "we are on the path to compromise."

Issoufou was expected in the capital Ouagadougou ahead of the summit.

In an apparent show of compromise with ECOWAS, Burkina's junta has drawn up a document that it gave to the country's political parties on Wednesday.

It proposes a constitutional referendum on December 24, 2024 and legislative and presidential elections on February 25, 2025.

The situation seems more complex in Guinea, another fragile state but -- unlike Mali and Burkina Faso -- not mired in a jihadist crisis.

The Guinean junta has refused an ECOWAS mediator and announced a 36-month transition period, a timeline that current African Union chairman and Senegalese President Macky Sall has described as "unthinkable."

"ECOWAS will have to take measures," Sall said.

The bloc had at the last summit urged Guinean leaders to establish a framework for dialogue with political actors and civil society.

On Monday, the post-coup prime minister, Mohamed Beavogui, met with some political parties and civil society groups for initial discussions.