'The police only asked me to keep the gun in my car, I listened because I wanted a peaceful demo' — Joshua Akamba 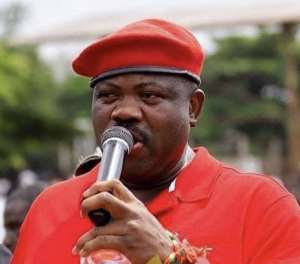 Joshua Akamba, the National Organizer of the opposition National Democratic (NDC) and a key member of Arise Ghana, organisers of the 'Krom Ay3 shi' demo has denied being arrested by police for carrying a gun.

According to him, the police only advised him to keep his gun in his car.

Speaking on the Accra-based Angle FM/TV's Anopa Bofoo morning show, which was monitored by Modernghana News on Thursday, June 30, 2022, he confirmed that he only followed the advice of the police in his quest to ensure a peaceful and violent free demonstration.

"When you are being approached by the police who are familiar with you and advise you that if you have the gun with you, you should keep it in your vehicle, is that an offence?

"Exactly, the Police urged me to keep the gun in my car having cited a scenario that someone with a weapon unknowingly might commit a crime but because I have a gun openly, I maybe figured which will land me in trouble,” he noted.

According to him, he instructed his driver to return the gun to his house.

He said the gun was for his protection.

"And I listened because I wanted a peaceful demonstration, I wasn't there for violence. And then I moved and said if that would be an issue, my driver should take it home because the police had assured us [protestors] of protection," he explained to the host in the local Twi dialect.

On the second day Wednesday, June 29, 2022 of the Arise Ghana demonstration, the police announced in a tweet sighted by this portal that they had spotted a protester Joshua Akamba holding a gun at the Elwak Stadium in Accra.

“Demonstrator Spotted with Weapon at El-Wak.

"The Police have spotted a demonstrator, Joshua Akamba with a weapon among the crowd of demonstrators gathered around the El WakStadium, today, 29th June 2022.

“He was duly advised by the Police to put the weapon away after his attention was drawn to the illegality associated with such an act. He was also urged to notify other demonstrators to desist from carrying offensive weapons during the demonstration,” the police tweeted on Wednesday.