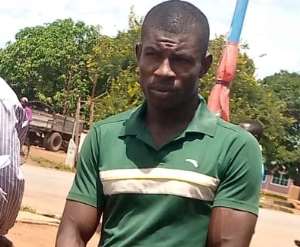 An unemployed man from Kwame Danso in the Sene East District, Augustine Kwaku, has been sentenced to 4years imprisonment by the Atebubu Magistrate Court presided by His Lordship Andrews Kwadwo, for stealing eleven sheep in the Bono East Region.

Augustine pleaded guilty and was jailed on his plea of guilty.

According to court documents available to this paper, Augustine was heading from Kwame Danso towards Atebubu in a cargo truck with the sheep suspected to have been stolen from the surrounding villages but was intercepted at Bresuanu, a police checkpoint.

ers upon interrogation and was subsequently arrested for theft.

He was later charged with the offence and arraigned. Owners of the animals were invited to the court where they identified their animals and took them away leaving only two now with the law enforcement agents.

This paper gathered, however, that some of the owners were unhappy that the convict was sentenced only to four years because, according to them, Augustine was a known jailbird and will soon come out and continue his stock in trade and make life unbearable for them.

'Forgive me if I was wrong to spearhead renovation of Asomdw...
2 minutes ago