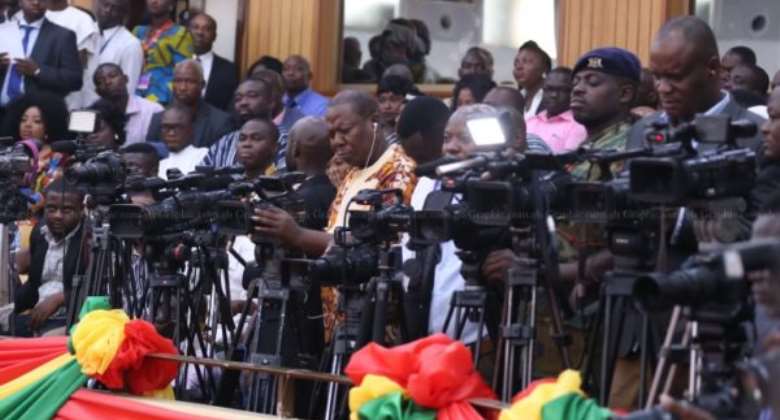 It is becoming more and more obvious that our hard-of-hearing ruling-elites, just don't think of the longterm consequences, of the destruction of the natural environment for short-term gain, by a powerful and greedy few. Hmmm, ey3nsem piiiiii, ooooo, Ghanafuo.

Little wonder, then, that today, our elites are mostly beholden to the big-thieves-in-high-places, and Ghana's current cohort of super-ruthless regime-crony-tycoons, who now dominate our country - and all of whom are determined to send their personal net worth to stratospheric heights: at society's expense, come hell or high water.

Never has it therefore been more critical, in our post-independence history, for the more responsible sections of Ghana's mainstream media, to support communities nationwide, which instinctively understand clearly that our nation's remaining natural capital, is actually priceless and must be protected by ordinary people themselves.

As we witness the ecocide resulting in poisoned rivers, groundwater and soils nationwide, by the extractive industries, across vast swathes of the Ghanaian countryside, it is now becoming clear to communities across the nation that at a time when climate change is impacting Ghana negatively, natural capital, is, in reality, much, much more valuable, than all Ghana's mineral resources combined.

The stand being taken by the Chiefs, Elders and youth of the Awutu traditional area, against plans to mine lithium there, is a case in point.

That is why (if they understand their watchdog-role in our democratic society, properly, that is), the more responsible sections of Ghana's mainstream media, ought to start giving their unflinching support to Ghana's best green entrepreneurs, such the CEO of the Legon Botanical Gardens, Eugene Kofi Boakye-Yiadom, and the founder of the agrisector social impact business, B-BOVID, Issa Ouedraogo, as well as local environmental activists, who campaign against environmental degradation, and the conservation-focused organisations they collaborate with, such as A Rocha Ghana and Eco-Conscious Citizens Group, on a regular basis.

As the anniversary of the day on which Ghana became a Republic (1st July, 1960), approaches, the more responsible sections of the Ghanaian media, ought to commit to being at the forefront, henceforth, in the campaign to promote state policies designed to engender climate-resilient green growth - as the common-good and equitable-end, which we must seek as a wise and aspirational African people: in creating wealth that remains locally, and generates fulfilling-jobs, galore, across the entire landmass, of the sovereign territory, of the Republic of Ghana. Full stop. Case closed.