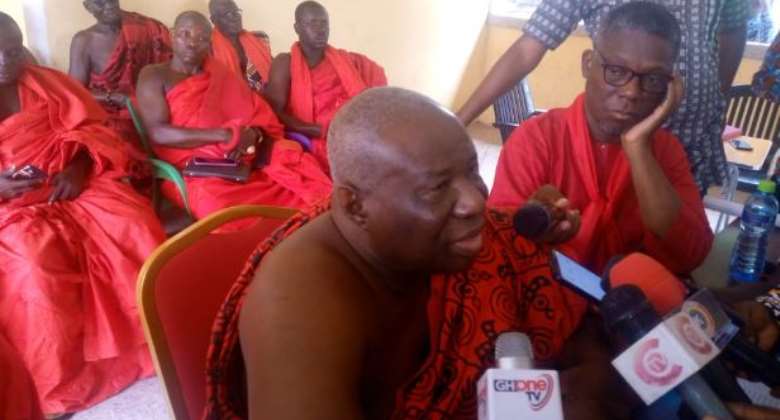 The traditional leaders and residents of Winneba have vowed to resist any mining activity in the Winneba Forest Reserve.

The chiefs and residents cautioned the Minerals Commission to take its hands off the Winneba Forest.

The youth of Winneba has stated that they are prepared to lay down their lives to protect the forest, noting that mining activities will destroy their land and the Cultural Heritage of Winneba.

They have therefore urged the government and the Mineral Commission to come out immediately and respond to the allegations that they have sold the Winneba Forest for mining activities.

They indicated that they have cited media reports with a letter that Government of Ghana has sold the Winneba Forest.

They said they have been informed that the Minerals Commission is coming to mine Lithium and other Mineral resources from it.

Speaking to the media at a press conference, the Paramount Chief of the Effutu Traditional Area, Neeyi Ghatey VI, explained that they have gotten a notice that their forest which serves as a place where they hunt antelope for their Aboakyire Festival, gives them rainfall, and other important activities has been sold by government.

According to him, they are not going to sit down for their only Forest to be sold for mining activities.

The Paramount Chief added they have also seen publication in print media and other social media platforms that those occupying some parts of the Winneba Forest should vacate the land within 21 days before their houses and other properties are demolished for the mining activities.

He therefore cautioned the Minerals Commission not to make any attempt to touch the forest which has been there since he was born, adding that nothing will make them allow the Government to mine in the forest.