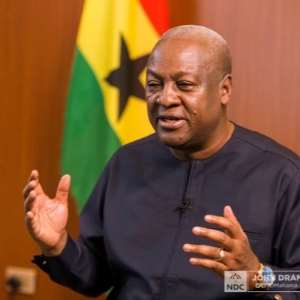 Former President John Dramani Mahama says the Akufo-Addo government is struggling because it has collateralised almost every revenue source of the country.

According to him, the most dangerous part of the collateralisation is the fact that the Akufo-Addo government has already taken the money and spent it recklessly.

“There is the collateralization of all sources of revenues and it is affecting them because these revenues are no longer available, they have taken them upfront and spent them.

“But the more important thing is the effect it will have on our future and future governments. For instance, ESLA, till 2035, it means that governments now, and 2035 are not going to have access to any extra ESLA revenues,” John Dramani Mahama said.

The 2020 presidential candidate of the NDC added, “GETFUnd, they have used it to float a bond and so they themselves and future governments will not have access to GETFUnd revenues.

“That is why I said the other time when the TUC asked that the President should take some of the taxes off, I said some of the taxes, they can’t take them off because they have collected the money and spent it upfront.”

Ex-President Mahama further bemoaned the excessive borrowing of the ruling government, insisting that the most painful aspect is that President Akufo-Addo together with his vice Dr. Mahamudu Bawumia and Finance Minister Ken Ofori-Atta do not know how to get Ghana out of the current economic mess.