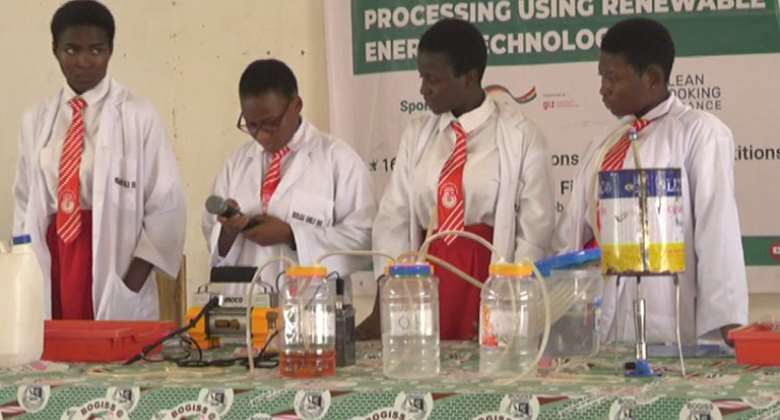 Over the years, Ghana has depended so much on the use of conventional energy (power) which is derived from natural gas, diesel, Heavy Fuel Oils, (HFO), Hydro among others to produce the energy requirement of the country for so long.

In an interview with ModernGhana News in Bolgatanga, the Programme Coordinator of the SHSs Renewable Energy Challenge and Energy Commission Julius Nkansah-Nyarko said the aim of the programme is to whip up students' interest in practical application rather than the theory being learnt over the years without practical results.

Mr. Nkansah-Nyarko said, in his view, the youth are full of innovations that can bring to bear on research which can be solutions to solve the renewable energy at the local level.

The Upper East Regional STEM Coordinator, Ms Faustinan Agetara lauded BOGISS and the winning team expressing hope that her girls were going to go to the grand finale and bring home the cup.

The leader of the winning team, Bolgatanga Girls SHS, Miss Adiba Emmaculate Amoah said their project was plastics fuel gas generation to suit the current environment of plastics menace. She stressed that unlike last year, their group entered the competition with solar cooker.

Miss Amoah indicated that, as plastics are often gathered and burned, they release poisonous substances into the air which end up polluting the air and the entire environment.

The project she said was aimed at solving the problem of air pollution. She added that though they were in a competition, their success came as a surprise as there were others with equally innovative ideas.

The Energy Commission (EC) as part of its obligation under the Renewable Energy Act, 2011 (Act 832), is mandated for promoting the development and utilization of renewable energy resources as well as recommend and advise relevant stakeholders on the educational curriculum on efficient use of renewable energy sources and develop programmes for its main-streaming.