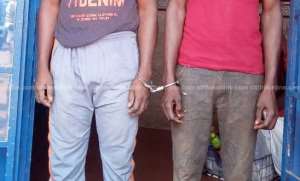 Two persons have been remanded into police custody in Kpetoe in the Volta Region in connection with the murder and discovery of a headless body of a man in a bush.

The two suspects, a traditional priest and a herbalist, were arrested by the Kpetoe Divisional Police Command after it was noted that the two were hosted by the prime suspect, who is currently on the run.

The body of Afetor Yesu was discovered on June 15, 2022, after the suspect turned up in the house of the victim, requesting a room to rent.

Confirming the arrest to Citi News, assemblyman for the Kpetoe South Electoral Area, Philip Akpese Jomo, noted that, the two suspects have been remanded into police custody pending investigations.

He however noted that, the community is working together with the police to arrest the prime suspect and retrieve the head of the deceased.