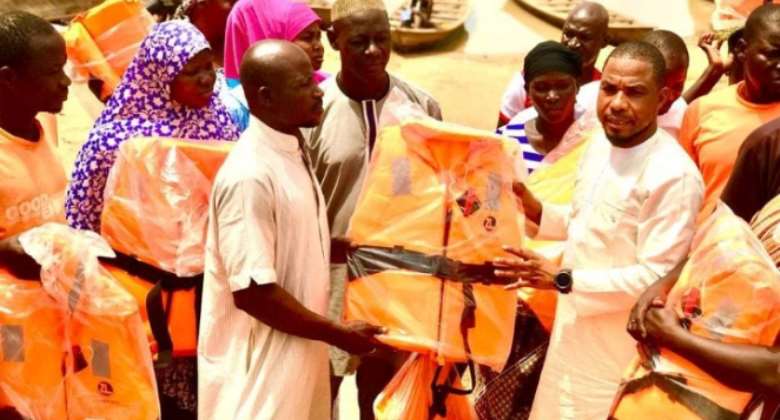 The District Chief Executive (DCE) for North Gonja District of the Savannah Region, Adam Eliasu as part of measures to curb casualties in boat accidents has started a campaign on safety.

The initiative envisioned by the DCE is aimed at preventing deaths during traveling and transportation on the river.

As part of the initiative, the DCE in collaboration with Ecozile Ltd on Tuesday June 28, 2022 donated 200 pieces of life jackets to boat operators on the White Volta lake.

At a brief ceremony to present the life saving items, the DCE urged the operators to make good use of the items to enhance their operations and safety.

He also entreated them to ensure strict adherence to the use of the jackets to avoid the situation where travellers wear the life jackets and later remove them.

He regrettably recounted how lives were unfortunately lost in 2016 and 2014 on the White Volta due to several reasons. He noted that it is proper that travellers secure their lives by wearing the life jackets to curb the reoccurrence of the dark days.

He noted that he is committed to the eradication of such unfortunate incidents because lives, he said, are priceless.

The boat operators after receiving the items, commended the DCE for the kind gesture and pledged to put them into good use to enhance their activities and safety.

Ghana's main waterway, the White Volta is the headstream of the Volta river. The White Volta emerges in Northern Burkina Faso, flows through for approximately 1,352km (840 miles) North of Ghana and empties into lake volta in Ghana.

This major geographical feature poses water safety challenges that call for attention from authorities. It has become an annual phenomenon where the banks of the White Volta in Daboya overflows putting lives and properties in danger. There have been boat accidents resulting in casualties. The recent one was as far back as 2017 (victims rescued). The year 2014 (6 casualties) and 2016 (3 casualties) were recorded . Rainfall patterns and Bagre Dam spillage are the major causes.

These are crucial pieces of equipment that have helped save hundreds of lives over the years, they can keep you afloat and safe for up to 24hrs if the life vest is properly fitted. The importance of water safety is not lost on Hon Red Bawa, as he calls for commuters to make use of all life vests, life jackets or personal protective/floatation equipments.

The topography of North Gonja is generally fluctuating with altitude between 70-500 meters above sea levels. The white Volta serves as a main drainage of the District. The rains begin around May and end in October, the rainfall is seasonal and is characterized by a single maximum. The mean annual rainfall is about 1144mm. The rainfall pattern is erratic, beginning in late April to late October, June, July and August generally record the highest rainfall and also the greatest number of rainy days. Erosion and floods are common due to the torrential nature of the rains.

In anticipation and early response to this year's possible overflow, the DCE Hon. Adam Eliasu has started an advocacy program for water safety and resources.