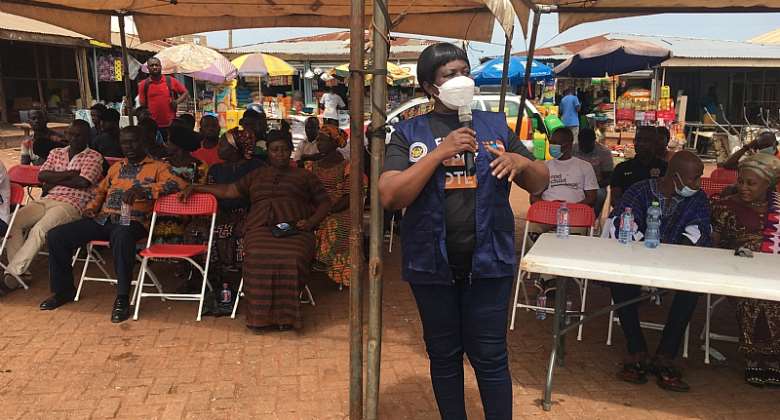 Market leaders, traditional authorities and institutional heads have received training to equip them as paralegals to address domestic violence and child abuse issues in the Bono East Region.

The participants in a two-day workshop were taken through the Children’s Act, Domestic Violence Act, Spousal and Human Rights, the constitution of Ghana, child’s rights and marriage among others.

To help encourage victims to freely report domestic violence and child abuse cases, the paralegal units have been established at the various market centres to allow victims to call in to address their cases.

Madam Malonin Asibi, Head of Domestic Violence Secretariat at the Ministry of Gender inaugurated the Paralegals on Tuesday at Techiman the Bono East Regional capital.

She said this would allow victims who were mostly market women and vulnerable children to report case among other things.

Madam Asibi noted that domestic violence and child abuse was everywhere across the globe adding that efforts were being made to end or reduce it in this part of the world to help develop and make women and children more productive.

Madam Asibi hinted that the Ministry was in collaboration with the United Nations Fund for Populations Agency (UNFPA) to strengthen stakeholders on these platforms to fight and eradicate domestic violence and child abuse which has over the years denied women and children the dignity of life in society.

She disclosed that many of these cases were unreported and the need to institute strategic measures by creating an easy platform to allow cases to be reported was paramount since it contributes to addressing and solving cases of domestic violence among other things.

She urged Paralegals to contribute to ending domestic violence and child abuse issues in the communities by encouraging victims to report cases of such nature.

Police Detective Inspector Sabina Quandzie at the Domestic Violence and Victim Support Unit in the Techniman Divisional Police Headquarters lamented the inability of victims to report cases of abuse to the unit for redress.

Dectective Inspector Quandzie noted that to address such cases the unit was working with other organizations such as the Gender Ministry, Department of Social Welfare and development partners to strengthen women and children who were the most victims to stand up against any violence towards them in the Bono East Region and country at large.

She mentioned that abuses such as rape, incest, defilement,spousal abuse, bad parenting, indecent assault and human trafficking activities must be reported so that culprits would be punished to deter others.

Detective Inspector Quandzie noted that cases of defilement and other domestic abuses has declined this year as compared to last year and this was due to the frequent education.

Nana Konadu Yiadom Divisional Chief of Ayeasu in the Techniman Traditional area pledged the support of the traditional authority to end domestic violence and child abuse as it did not augur well for the development of women and children in the communities.

Nana Yiadom mentioned that cases such as domestic violence would no longer be resolved out of court but would allow the law to take its full course since that was the only way to end the menace in the area.

He urged victims not to hesitate in reporting such cases to the authorities such as the police, paralegals and other stakeholders that matter so as to find lasting solutions to such cases.

Hottest Photo Reports
Catch up with all the political quotes from our politicians.
Advertise here
More from Social News
ModernGhana Links
Ghana is true bastion of democracy – Outgoing Canadian High Commissioner
Lack of toilet facility in a school causes pregnancy of 15-year-old student
The law will deal with you if you failed to pay your tax — Jaman South MCE
TOP STORIES

Government to evacuate 331 stranded Ghanaians in Dubai, UAE
13 minutes ago