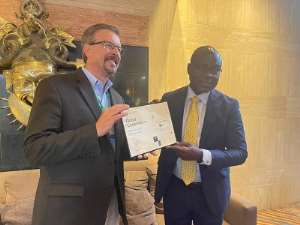 The Director of External Relations of ASTM International, a global standards organisation, James P. Olshefskyan has pledged the organisation's support to Ghana's efforts at creating a world class petroleum industry.

He said the American-based private standards-setting body, will provide technical assistance to build the capacity of local experts to enhance the reliability and profitability of Ghana’s nascent oil and gas industry.

Mr James P. Olshefskyan made this known in a meeting with the Director General of the Ghana Standards Authority (GSA), Professor Alex Dodoo and the ASTM team on the sidelines of the 66th Council Meetings of the African Organisation for Standardisation ( ARSO ) in Yaounde, Cameroon on Tuesday.

He said the ASTM has developed standards in the petroleum industry that can support Ghana drive at building a robust industry.

" We will focus on capacity building to develop the capacity of local experts," he said.

Prof. Dodoo said the government was keen on realising its oil and gas potential in a sustainable manner to create jobs and support economic growth.

" We welcomes any mutually-beneficial partnership in that regard because our petroleum hub project is an indication of our interest in becoming a key player in the global petroleum industry,” he said.

He said the government was positioning itself at the forefront of hydrocarbons production, hoping to create strong midstream and downstream industries in the next decade.

With more than 7 billion barrels of petroleum and 6 trillion cu.f of natural gas, Ghana holds the sixth largest proven petroleum reserves in Africa.

The country plans to set up a $60 billion Petroleum Hub in the Western region, aiming to become the centre for downstream in West Africa and a world-class exporter.

The hub will house four refineries with a combined capacity of 600,000 barrels per stream day, targeting to cover 50% of petroleum consumption in the sub-region. It plans to hold and redistribute 30 million metric tonnes of oil each year.

The Director-General of GSA, Prof Alex Dodoo said streamlining petroleum standards in Africa will promote consistency and facilitate compliance in the region.

“Harmonizing standards in the region will allow players across the value chain to demonstrate that products, services or processes are in compliance with applicable legislation, while promoting business,” the clinical pharmacologist indicated.

ASTM International and the American Petroleum Institute (API) are jointly working on a three-year project to harmonize petroleum standards in West Africa.

The project supports the capacity of developing countries in the areas of legal and regulatory frameworks, standards development, conformity assessment procedures, and private sector engagement.