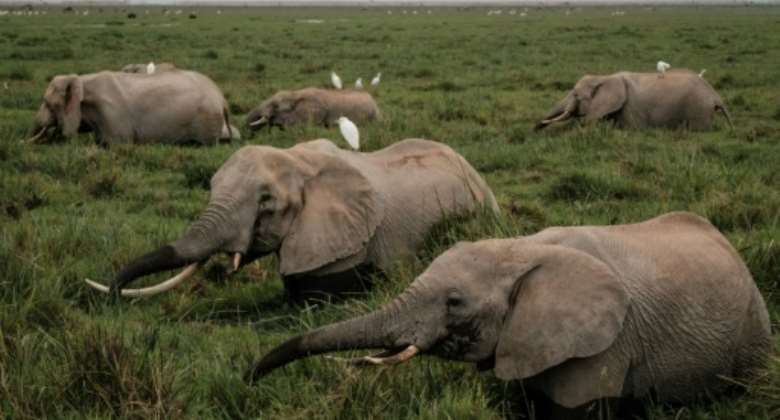 The terrain on the edge of Amboseli National Park in southern Kenya boasts elephants, giraffes, antelopes and lions. By Yasuyoshi CHIBA (AFP)

The bird count gets underway -- two members of the superb starling family, a Nubian woodpecker, and so on.

The census unfolding in the shadow of Mount Kilimanjaro is part of a project with a dual aim -- using biodiversity to make money, which will then help to preserve natural resources and support local communities.

The 5,000-hectare (12,400-acre) terrain on the edge of Amboseli National Park in southern Kenya boasts elephants, giraffes, antelopes and lions.

The reserve's owners are the Maasai people, and no fence separates the land from territory used by herders for their cows, sheep, goats and donkeys.

These days, well-heeled visitors are returning to the reserve after the Covid-19 pandemic, which had wrenching financial consequences.

"Tourism completely collapsed, and we realised that we need to find other ways of rising revenue and income to be able to continue paying the leases," said Mohanjeet Brar, managing director of tour operator Gamewatchers Safaris, which rents Selenkay from the Maasai.

The reserve has an eye on the potential from carbon credits and planned biodiversity credits -- mechanisms designed to channel funds to landowners who preserve natural hotspots for rare species and carbon storage.

For Selenkay, the first step towards realising these gains is to collect data -- to make an inventory of the reserve's treasure house.

Tourism income supports the local community in many ways, helping to provide water for people and livestock and generating jobs. By Yasuyoshi CHIBA (AFP)

Cameras and acoustic recorders are being used to give an idea of which animals are present on the reserve and in what numbers, and these are supplemented by human observations.

Over one month, morning and evening, team members are stationed at specific points to make a tally of all the animals seen and heard for 10 minutes.

"Is biodiversity higher in the conservancy than outside the conservancy and what's driving that increase?" said Andrew Davies, an assistant professor at Harvard University in the United States, who is helping the research.

"Once we know that from a scientific perspective, we can begin thinking about making a credit to sell."

Helped by a drone, the researchers are also getting a picture of the amount of carbon stored in trees and in the soil.

Tourism income from Brar's company supports the local community in many ways, helping to provide water for people and livestock and generating jobs. All of the rangers and almost all of Selenkay's staff are Maasai.

Even so, living conditions are still difficult, said Noolasho Keteko, one of the women from the Maasai village bordering the conservancy.

The crop-haired mother of eight, adorned with colourful bead jewellery, also makes money from tourist visits to the mud-hut village and from selling jewellery.

Team members are stationed at specific points to make a tally of all the animals seen and heard. By Yasuyoshi CHIBA (AFP)

But when Selenkay closes in April and May for the rainy season, the village needs assistance, she explained.

People in the district want to prevent the land from being sold, turned into fields and fenced off, preventing wildlife from moving freely.

But a short distance from the reserve, a high fence already crosses the landscape to make way for fields.

Income from credits could ease the pressure on the environment, said one of the guides, Nicholas Koyieyo.

It would encourage herders to cut back on numbers of cattle, enabling grass and trees to regenerate, he said.

The big question is whether Selenkay's resources can be adequately monetised.

"Kenya has a very fast-growing population -- the land price is also high (and) there are many options for land use," Brar said.

The market for carbon credits is well-established, although far from perfect.

Under it, carbon polluters can offset their greenhouse-gas emissions by "purchasing" emissions that are reduced or saved by other members in the scheme.

But the much-touted market for biodiversity credits has yet to be created.

Cameras and acoustic recorders are being used to give an idea of which animals are present on the reserve. By Yasuyoshi CHIBA (AFP)

On Sunday, preparatory talks for a UN biodiversity summit due in December wound up in Nairobi after making scant progress.

"There's no biodiversity trading market and we have to develop that," said Davies.

"We need carbon as a first step to get the things going, to get trust from the landowners," he said.