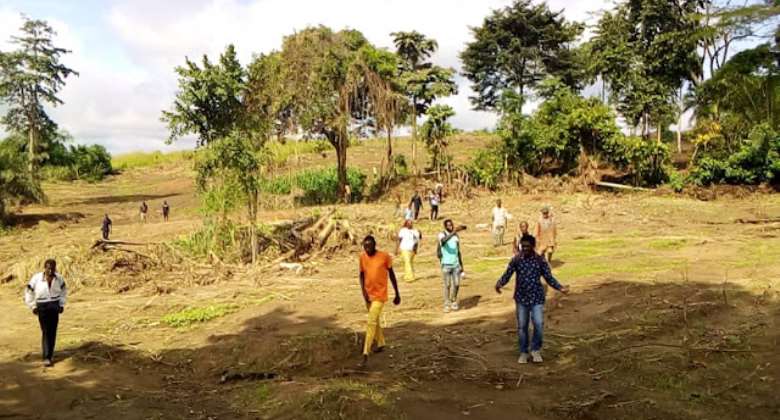 Tension is brewing at Mankrong between the Apedwahene and farmers over the destruction of 33 farmlands and uncompleted buildings as their lands are being taken over by the Chief.

Mankrong is a town in Ayensuano District of the Eastern Region of Ghana and according to the community, who are predominantly farmers, their ancestors lived and farm on it 150 years ago.

According to the Chiefs, the town was peaceful until about two weeks ago when they saw earth moving machines moved into the town and started excavation works on certain parcels of land in the town.

When they enquired from the well-armed workers speculated to have been brought by Okyenhene's Mponuahene to do the excavation works they were informed the Apedwahene through Okyenhene Mponuahene, had taken possession of the land.

The community said they could have resisted with equal force of arms but decided to use due process instead.

They raised an issue as to where the Apedwahene and Okyenhene Mponuahene expect these farmers whose livelihoods depended on the land destroyed to get their daily bread from?

The people are therefore demanding with immediate effect, the recall of all the earthmoving machines from the land by the Apedwahene and Okyenhene Mponuahene.

That the Apedwahene pays for all properties destroyed by his alleged illegal actions on the land with an assurance to the chiefs and people of Mankrong that their lands, henceforth, will not be attacked in this "capricious manner."

They also sent a strong warning to the Apedwahene and the Okyenhene Mponuahene that ''if we still see these earthmoving machines on our land after three days, counting from today, we will advise ourselves. The chiefs and people of Mankrong are peace loving people but are not cowards," the statement concluded.

A former Assemblyman for Mankrong Electoral Area who is also the Cocoa Life president Mr Francis Teinor in an interview with the media appealed to the President Of Ghana Nana Addo Akufo-Addo to intervene and call the Apedwahene and Mponuahene to order else they will resist any further attempt to destroy lands that serve as their source of income.