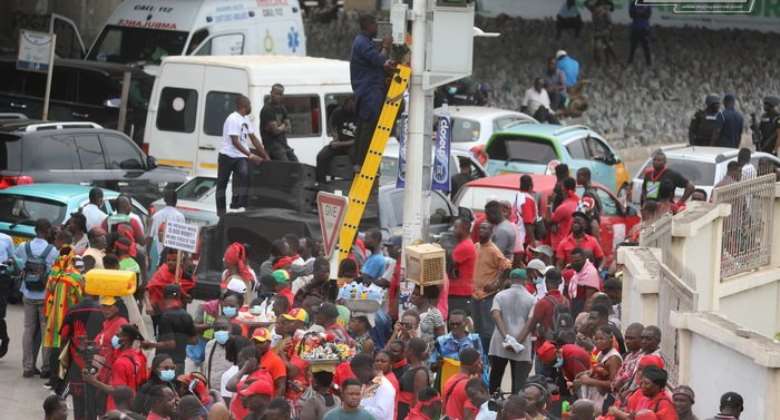 The Arise Ghana ‘krom ay3 hye’ demonstration which was meant to be peaceful today has resulted in chaos following a violent clash between the Police and protesters.

Yesterday, some members of the leadership of the group were in court to face the Police over an impasse on the modalities for the planned two-day demonstration.

At the Criminal Division of the Accra High Court yesterday, Justice Comfort Tasiame who presided over the matter partially granted the application by the Police and directed demonstrators to converge at Obra Spot, and go through Farrisco Avenue to TUC and end at the Independent Square.

The court further directed that the intended demonstration should start at 8am and end at 4pm.

Having filed an appeal and a Stay of Execution on the ruling of the court, the Arise Ghana group at midday today started their demonstration.

During the protest, chaos erupted following a move by demonstrators to use unapproved routes.

Some of the irate protestors after failing to force their way through the barrier of the Police resorted to pelted stones at the Police and managed to destroy the glass windows of some Police buses.

The Police in a move to get the demonstrating crowd in order fired tear gas and managed to arrest some of the violent protesters.