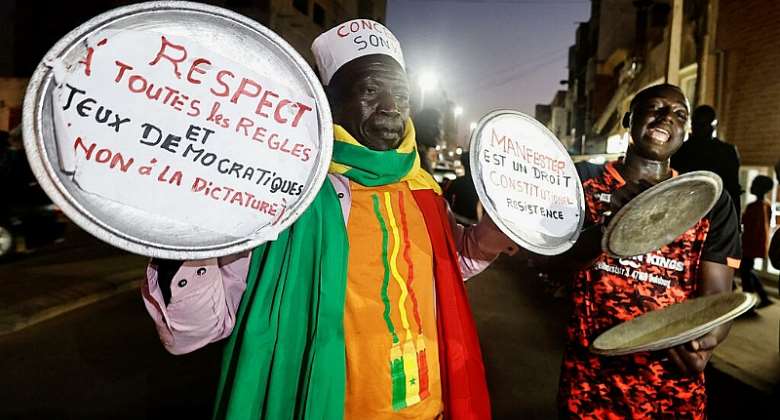 A Senegal court Tuesday handed an opposition MP a six-month suspended prison sentence for defying a ban on protests in the tense run-up to legislative elections in July. Another lawmaker and 82 other defendants tried in the same case were released.

MPs Dethie Fall and Mame Diarra Fame were tried along with the 82 other defendants at the court in the capital Dakar.

They were arrested on 17 June during a rally called by the opposition after its list of candidates for the elections was disqualified on technical grounds. The rally had been banned by the authorities, citing the risk of unrest.

Clashes broke out in Dakar and the southern region of Casamance after youths defied the ban.

Three people died and some 200 were arrested, according to the opposition.

Fall "constantly acknowledged having been the main organiser" of the demonstration, court president Ahmed Ba said, handing him a six-month suspended sentence and fine of 100,000 CFA francs ($160).

The judge dismissed the case against Fame, saying the facts against her had not been sufficiently established.

Ba also acquitted the other 82 co-defendants due to "insufficiently established facts" at the end of the trial, which lasted more than 14 hours, ending early Tuesday.

Supporters, including main opposition leader Ousmane Sonko, had cheered the defendants as they arrived in court Monday morning.

"I reject all these facts of which I am accused," said Fall. "We are in Senegal -- the right to demonstrate is enshrined in the constitution."

Fellow legislator Fame said she was arrested after she and her two children went to see opposition figure and Dakar mayor Barthelemy Dias.

"Tell me if in Senegal the laws prohibit going to see friends, relatives or acquaintances," she said.

The two MPs accused law enforcement of "kidnapping" them.

Tensions have been rising since Senegal's highest court on 3 June upheld the ban on the candidates' list.

The bar blocked Sonko, a 2019 presidential candidate, from contesting the 31 July parliamentary election.

The opposition, which has called for fresh demonstrations on Wednesday, has threatened to prevent the vote from taking place if the list is not reinstated.

Civil society groups have called for dialogue and restraint.

Tension is particularly high as the arrest of Sonko in March last year lead to days of deadly clashes.