Mindanao, Once the Worst Conflict Zone in Asia Shows the Possibility of Resolving Global Disputes 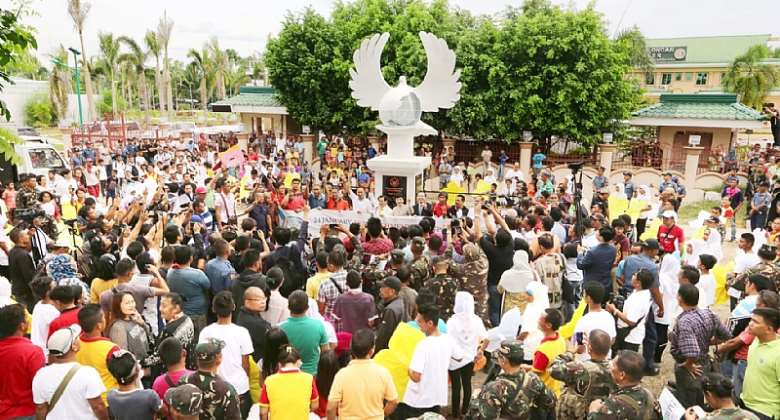 HWPL Peace Monument Unveiling Ceremony in Mindanao (2015.5.25 Buluan in province of Maguindanao in the Philippines)

The war between Ukraine and Russia killed over 3,000 people and is lasting nearly 4 months since the day the war broke out, and In Africa, various types of disputes including political, border, religious, racial disputes, infighting, strifes, revolutions are ongoing. While coping with the new normal, the international community faces new concerns over the risk of armed conflict increasing in various places including their own country. The emergence of a new conflict structure requires a new approach to problem-solving.

In this reality, the achievements of the international peace organization Heavenly Culture, World Peace, Restoration of Light (HWPL), at the private level present a 'New model of peace' to the global community. Chairman Lee Man-hee of HWPL is a Korean War veteran who experienced the horrors of the war, discharged from his military service because of a gunshot wound. He is a peace activist who works to achieve the common goal of cessation of war and world peace. His representative achievement in leading the HWPL was his contribution to peace in Mindanao, the Philippines.

But even after the agreement, the deep-rooted conflict between Islam and Catholicism did not end. Then, in September 2013, Antonio Ledesma, former Catholic Archbishop of the Metropolitan Archdiocese of Cagayan de Oro, requested Chairman Lee of HWPL to mediate the settlement of the Mindanao conflict. Chairman Lee who toured the world 31 times for peace until just before COVID-19, responded to visit Mindanao, which was still tense due to armed conflicts.

On January 24, 2014, Chairman Lee visited Mindanao and held a Peace Walk, inviting more than 1,000 people including students from Mindanao State University, and members of Youth Group, to the City of General Santos, Philippines for the first time. After the Peace Walk, Chairman Lee called to stop any acts that might encourage conflict in the name of religion and stressed that "The will of the creator is not war, but peace." After then, he asked the attendees "Do you want peace or war? If you want peace, please raise your hands." Seeing everyone with raised hands, Chairman Lee asked Fernando Capalla, former Davao Archbishop, and Esmael Mangudadatu, Governor of Maguindanao to sign a peace agreement.

The Civil Peace Agreement arbitrated by HWPL was Mindanao's declaration of permanent peace. Since then, HWPL and all related parties, including local politics, religion, and civil society, have continued to cooperate to establish peace in Mindanao. Efforts initiated by civil society have been developed to cooperate in the education sector with central government ministries at the national level. Starting with signing MOUs with 70 educational institutions in February 2016, HWPL has implemented peace education at the international level presented by the UN and UNESCO to the students and citizens in the Philippines. HWPL signed an MOU with The Commission on Higher Education(CHED) in 2018. These efforts are affecting Africa beyond Mindanao. Last 2021, HWPL peace education was implemented for 101 sessions at 47 organizations in Nigeria and Ghana, and among those, 115 peace educators met with Commissioners of Education for requesting their cooperation. In addition, through 2022 HWPL Western Africa Peace Educator Empowerment Training, 196 peace educators from 121 organizations graduated from the program and about 40 peace education was conducted for 2 months, May and June.

Regarding future activities in Mindanao, John Rommel Garces, Chief Branch Manager of HWPL's Philippines, said, "The core value of the Mindanao Peace Agreement is an approach of 'citizen-centered awareness improvement and action' for peace. According to this approach, HWPL will carry out peace projects based on civil society such as education, religion, youth, and women.", "In 2022, we will focus on the establishment of additional peace monuments in Mindanao as well as various locations in the Philippines, the realization of autonomy in the Bangsamoro Muslim Mindanao Autonomous Region (BARMM) and the promotion of cooperative projects for peace-building, establishment of the HWPL Interfaith Religious Peace Office in Davao City and other places in Mindanao, and to host active regular meetings," he added.

Heavenly Culture, World Peace, Restoration of Light (HWPL) is an international peace organization established for the cessation of war in the global village and for world peace. HWPL is a non-governmental organization registered with the UN Department of Global Communications (DGC) and the UN Economic and Social Council (ECOSOC) as a special consultative status organization and registered in Seoul, Korea.