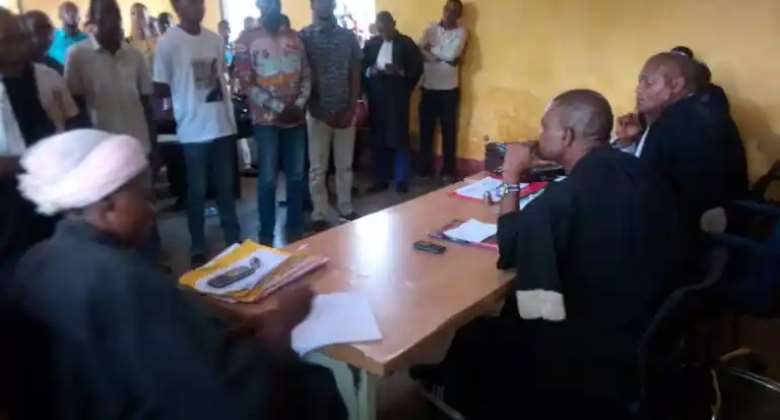 Congolese journalist Chilassy Bofumbo (center, in white T-shirt) was denied provisional release by the High Court in Mbandaka, the capital of DRC’s western Équateur province, on June 21, 2022. CPJ called for the immediate release of Bofumbo, who has been imprisoned since November. (Photo: José Maza)

Kinshasa, June 27, 2022 – Authorities in the Democratic Republic of the Congo should unconditionally release journalist Chilassy Bofumbo and all other members of the press jailed for their work, and ensure that the media in the country can work without fear of arrest, the Committee to Protect Journalists said Monday.

On Thursday, June 23, a judge at the High Court in Mbandaka, the capital of the DRC’s western province of Équateur, declined a June 21 request by Bofumbo’s lawyer, Edmond Mbokolo, for the journalist to be granted provisional release, according to Mbokolo, who spoke to CPJ over the phone, and media reports. Mbokolo told CPJ that Bofumbo is scheduled to appear in court again on June 28.

“Chilassy Bofumbo and all other members of the press behind bars for their work in the Democratic Republic of the Congo should be released without delay,” said Angela Quintal, CPJ’s Africa program coordinator, from Johannesburg, South Africa. “The prolonged and ongoing detention of journalists in the DRC is a grim indicator for press freedom in the country.”

Bofumbo is the editor-in-chief of the local broadcaster Radio Télévision Sarah, a correspondent for the Kinshasa-based Flash Info Plus news website and the Bukavu-based Radio l’Essentiel online broadcaster, and a coordinator for FILIMBI, a nongovernmental organization that promotes civil participation among Congolese youth, according to CPJ research. Bofumbo’s June 21 court appearance was the first since November 2021, when he was arrested while covering a protest, charged with various crimes, and his case was sent for review to the Court of Cassation in Kinshasa, the capital, according to CPJ research and Mbokolo.

Bofumbo appeared on CPJ’s 2021 prison census, which annually documents all journalists jailed around the world for their work on December 1. Separately, at least two other journalists — Patrick Lola and Christian Bofaya — were arrested in Mbandaka in January 2022 over their coverage of protests in Équateur province in late 2021, according to CPJ reporting.

Ghanaians must be involved in the process of negotiations wi...
16 minutes ago