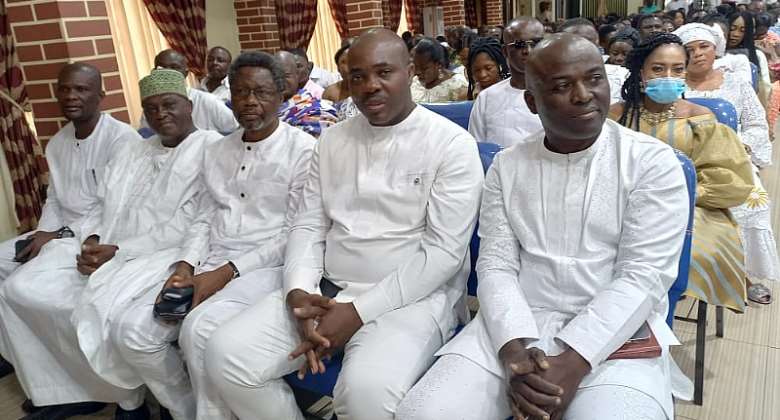 Candidate in the just ended New Patriotic Party (NPP) Chairmanship race in the Ashanti Region, Odeneho Kwaku Appiah (COKA), together with his family and campaign team has held a thanksgiving service at the Upper room revival assembly of the Assemblies of God church, Kwadaso Estate, Kumasi.

The program which was held on Sunday, June, 26,2022 saw the media, friends of COKA, party elders and founders, women leaders and identifiable groups amongst others in attendance.

The Thanksgiving service was to thank God for a successful polls, applaud the team, supporters, delegates and party faithfuls for standing with and by him throughout the campaign season and after.

The head pastor of the church, Pastor David Ohene Donkoh themed the service "Commandment to the watchman" quoting from Isaiah 62:1-7.

The former Afigya Kwabre South Chairman in his speech showed gratitude to God and his team of supporters and urged Ghanaians to continually pray amid the current economic hardship, adding that change will soon take place.

"I'm happy to be here today to thank God first of all, party delegates, faithful, elders, founders, identifiable groups and the general public at large for your continuous support and love showed me before and after the elections.

"I understand the current economic hardship is weighing everyone down. But regardless of the situation we all find ourselves in, there's hope. With prayers, supplication and hardwork, we shall all sail through. Throughout my life, I've never seen a prayerful person whom God has let down. Hold on, don't give up, hope is near," he encouraged the congregants.

COKA thanked the party’s supporters and well wishers for their hard work and commitment over the last few months, urging them to remain together and build a united front.

In a related development, some constituents from Afigya Kwabre East where he served as chairman for over 20 years, presented a cow, a while sheep as a gift to bless him for fighting a good course and not letting them down. COKA Ladies, serial callers and some other identifiable groups also presented packs of cake and portraits as a birthday present to COKA.

The thanksgiving service climaxed with a party at the Longford Royal Centre at Odeneho Kwadaso, bringing together over 3 thousand people from the Social class, cooperate, media, businessmen and women, traders, some Members of Parliament, clergy, and traditional leaders among others.