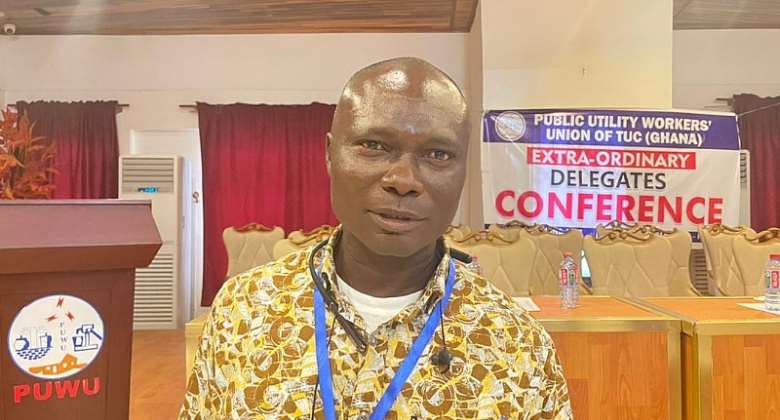 General Secretary of the Union, Mr. Michael Adumatta Nyantakyi who spoke to pressmen at an ‘Extra-Ordinary Delegates Conference’ held at the PUWU Hospitality and Conference Centre at Kasoa in the Central Region last Friday said, the election is in line with the constitution of the Union which requires that in the passing of an executive, with a period of more than two years to the Union’s next conference, a by-election must be organized to fill the vacant spot.

“Unfortunately last year December, we lost our Deputy General Secretary in the person of Bro. Richard Amiiba Nyaabah and so in line with our constitution, we have to hold an extra-ordinary delegates conference to elect a new person to continue the tenure.”, Mr. Nyantakyi said.

He was optimistic that delegates will elect a committed, dedicated and selfless candidate to fill the position.

Speaking to the press after his swearing-in, Mr. Timothy Nyame thanked the delegates for entrusting him with the powers to serve in the office of Deputy General Secretary of the union. He also promised to discharge his duties diligently by prioritizing the interest of the union and its members.

“This journey began years ago. I have served in various positions in PUWU at different regions since 1998. I want to thank God for this victory and the delegates for imposing such confidence in me. The campaign was so smooth devoid of insults or division and in the end, the margin is so clear signifying the trust the people have in me.

"This is a challenge for me to assist our General Secretary to deliver. The main reason for PUWU is to negotiate for better conditions of service for its members. I want to assure all members that we will deliver on all that was promised”, the new Deputy General Secretary said.

For his part, Mr. Adumatta Nyantakyi praised all delegates for ensuring that the elections were peaceful.

He said PUWU does not encourage violence among its members and as such, it was important for all members to ensure there is sanity and respect at all times.

Secretary General of the Trades Union Congress (TUC), Dr. Yaw Baah lauded PUWU for being a formidable force in the labour sector.

Dr. Baah who was present at the conference said even though PUWU is one of the smallest Unions under TUC, it is one of the strongest, well organised and with very good leadership.

He highlighted the importance of having competent individuals steering the affairs of the Union and charged the newly elected Deputy General Secretary to work more than his predecessor.

“It is important that PUWU elects a Deputy General Secretary because their constitution says so. The trade union movement is a democratic movement and so we go by our constitution. Every union has its constitution and the TUC which is the mother body has its own constitution which must be consistent with theirs. So the exercise is important," he said.

Acknowledging the current economic situation in the country, General Secretary, Mr. Adumatta Nyantakyi said PUWU as a union will continue to engage stakeholders to ensure the interest of its members are met.

“We will continue to engage with our management to ensure that at least the remunerations for staff should not be left to standstill and be eroded by the inflationary pressures of the day.

We will also keep talking to our members to also do their part in terms of their contribution towards productivity because if the company is doing well then we will be in a better position to negotiate for our fair share”, he said.

He added that the Union will continue to encourage its members to do their part by contributing to the growth of their various companies.