Do We Really Need to Celebrate Rawlings? 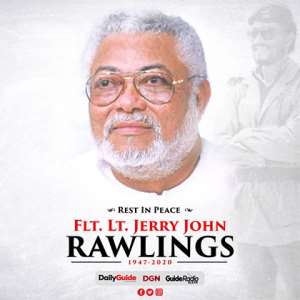 Nobody is destined to become the center of attraction and/or attention and the national development and celebratory agenda of any society or country in perpetuity. The proverbial Wheel of Fortune is eternally in flux, with every slot or spoke on the wheel enjoying its fleeing moment of fame and fortune. The legendary American popular artist Andrew (Andy) Warhol is best remembered for saying that “Everybody has his/her fifteen minutes of fame.” In the case of the late Chairman Jeremiah “Jerry” John Rawlings, the former President and “revolutionary” junta leader’s fame on Ghana’s political landscape and in the country’s postcolonial history lasted for some 40 years or approximately two generations, which was far more than he justifiably deserved, especially when one also reckons the incontrovertible fact that the Anlo-Ewe Trokosi Nationalist Generalissimo wreaked more havoc on his motherland than the country could be aptly said to have benefited from his epically failed leadership, even by Mr. Rawlings’ own public and personal account and admission.

For instance, his one greatest regret was the fact that the young men and women whom he had mentored as a “revolutionary” leader had turned out to be among the worst and most thoroughgoing corrupt politicians in Ghana’s Fourth Republic. Actually, Mr. Rawlings regretted having produced the worst caliber of any group of leaders or politicians anywhere in the postcolonial world. The so-called Third World, that is. So, when Mr. Frank Annoh-Dompreh, the Majority Chief Whip in Ghana’s Parliament, says that the most fitting tribute that can be paid to the half-Scottish, longest-ruling military dictator and two-term democratically elected President must, perforce, come from the key operatives of the faux social-democratic political establishment that was founded by Chairman Rawlings, the Member of Parliament on the ticket of the ruling New Patriotic Party (NPP) for the Nsawam-Adoagyiri Constituency, in the Eastern Region, cannot be impeached (See “Give Rawlings Befitting Recognition – Annoh-Dompreh to NDC” Modernghana.com 6/24/22).

This pretty much ties in with that age-old maxim that counsels that “Charity must always begin at home.” Mr. Annoh-Dompreh goes further to observe that compared to the years that the leadership of the National Democratic Congress had wielded the democratic reined of governance, the Akufo-Addo-led government of the New Patriotic Party has accorded far greater recognition to the globally acclaimed Founding-Father of the present main opposition party in the country, the National Democratic Congress, than the leadership of the latter political and ideological establishment ever afforded the acclaimed heroes and political and ideological idols of the Danquah-Busia-Dombo-inspired establishment of the New Patriotic Party.

Ironically, while his megalomaniacal tendencies were never in dispute, nevertheless, as a leader, Chairman Rawlings publicly claimed to be more ideologically and functionally focused on the so-called ideals of the Revolution, essentially, that quartet of incantatory mantra which Chairman Rawlings and his fanatical disciples routinely recited as follows: “Probity, Accountability, Transparency and Justice,” absolutely none of which purported tenets of the Revolution any of the key players or major leaders of the National Democratic Congress, including Chairman Rawlings himself, was remarkably known to be a studious adherent of in practice.

Still, the question of whether the late Chairman Jerry John Rawlings gets afforded more celebratory space on our National Calendar, irrespective of political party affiliation or ideological suasion, in the wake of his epochal passing or transition into eternity, is squarely a matter of what the overwhelming majority of the Ghanaian citizenry generally perceive to be the fact of whether, indeed, even as Mr. Kofi Adams, the former Jerry John Rawlings’ spokesperson, would have the rest of the nation believe, Chairman Rawlings had, during the 20 long years that he literally “bestrode Ghana’s political terrain as a Colossus,” in classical Shakespearean and Greco-Roman parlance, the Sogakope Mafia Godfather had made any worthwhile contributions to the development and onward movement of the Sovereign Democratic Republic of Ghana.