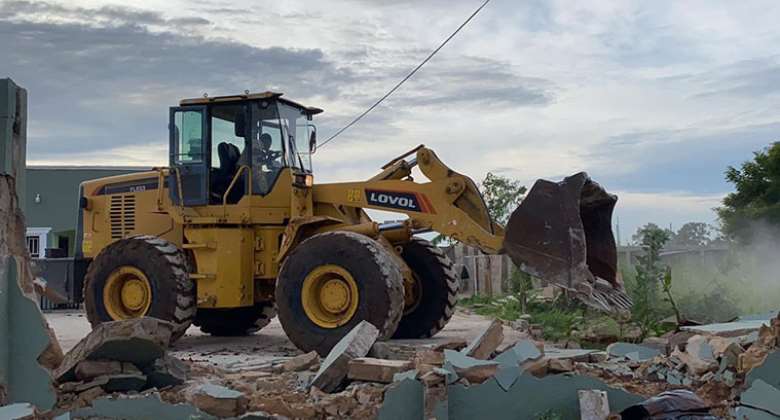 We are constrained to return to the subject of encroachers locking their sights on state lands. The encroachers are not only trespassing but building on such places as though there are no authorities in the country.

The impunity with which they do so is unfathomable.

The exercise to extricate encroachers who had marched, as it were, on state lands at Frafraha within the Adenta Municipal Assembly, and with unmatched impunity, continues to engage the minds of observers of such matters.

Had the Greater Accra Regional Minister, Henry Quartey, folded his arms as his predecessors did watching as the impunity continued, the Animal Research Institute (ARI) would have one day witnessed their offices replaced by structures put up by land guard-supported developers.

Such disregard for the laws of the land should be condemned and not condoned by badmouths.

This is one of the many subjects which should be spared politicisation by both opposition elements and supporters and members of the ruling party.

Issues which are not in tandem with propriety should not be condoned. Unfortunately, things do not pan out this way giving room for inappropriate remarks and conclusions.

There is no basis for people to encroach upon state lands secured especially by Executive Instruments.

We have listened worryingly to the remarks of some persons who though few, can nonetheless discourage office holders like the Greater Accra Regional Minister from undertaking their mandates.

We are emboldened, however, that the Greater Accra Region is blessed with a political head whose steadfastness offers him immunity to such counterproductive remarks.

No state can prosper without enforceable laws and regulations and we must join hands in ensuring the growth of our nation.

In some jurisdictions, even the 800 acres upon which the encroachers have put up houses could not have survived the earthmoving equipment deployed to demolish the structures on the remaining 200 acres.

The magnanimity exhibited by the Greater Accra Regional Minister and the Regional Coordinating Council is at a cost to the state, but under the circumstances, we can only let it be.  We have learnt that in spite of their encroachments, occupiers of the 800 acres are being hosted by the regional minister for discussions on how to assist them with the regularisation process.

Leading a region with so many interest groups, some of them displaying conduct not commensurate with their statuses, is a Herculean task. Such persons are more concerned about their individual interests and so ready to release toxic remarks in reaction to actions taken in the interest of the public and state. The Frafraha demolition exercise is a test case for us as a people on how much we are ready to support good cause regardless of the repercussions on some individuals.

Good governance and leadership is about taking decisions which will inure to the general good of society, the fallouts notwithstanding.

The germane state agencies should take swift actions when state lands are being encroached upon and not wait until structures spring up on them, and demolitions become inevitable.