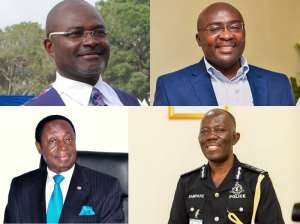 The four persons in my mind that Ghana and Ghanaians will be lucky to have as their future presidents are Hon. Kennedy Ohene Agyapong, Dr Alhaji Mahammudu Bawumia, Dr George Akuffo Dampare and Dr Kwabena Duffour.

I have not mentioned their names in order of preference but in alphabetical order according to their surnames. Any of them, and in their turns all of them, can best serve Ghana in the capacity as president and will surely be able to catapult Ghana into the sphere of internationally recognizable economic and human development to rid Ghanaians, and by extension black Africans, of their tagged "uncivilized bunch of corruption-infested people unable to manage their own affairs as human beings but always kowtowing to their white contemporaries for assistance of all sorts all the time”.

Let the public not rush into conclusions to denigrate the writer, or the publication, without first exercising patience to read to the end of this publication and giving the content the scrutiny and thoughtfulness it deserves.

Why is Kennedy Agyapong a choice for the presidency, a curious or doubting mind may ask? Kennedy Agyapong (Hon) has all the qualities it takes to be a successful president when given the nod. He is fair, firm and friendly. He understands the dynamics of politics to moving a nation and her citizens forward.

From empirical observations of his life, any honest person who is not a deceit themselves, would have noticed how Kennedy subscribes strictly to the three principles that make a successful leader or president.

He believes in "Meritocracy, Pragmatism and Honesty" to running a country successfully. These are the very three cardinal pillars on which the success of Singapore as an island nation without any natural resources has prosperously been built.

Kennedy is noted for wishing people ascend to higher positions on merit but not on the cancerous "whom you know", the bane of the economic development of Ghana, although the prevailing trait of the Ghanaian leadership. It is by giving positions to qualified persons who are capable of credibly performing the functions of their office, but not to clueless persons that you know or affiliated to, that a nation can be developed for the benefit of all.

He believes in the application of pragmatism as a catalyst to solving any problems, known and unknown, that comes the way of the nation since the enforcement of existing laws in the country is either weak, or nothing exciting, to write home about.

On pragmatism, one does not have to restrict themselves to any particular political ideology to resolving a problem that rears its ugly head at any moment in time but to quickly adopt any measure that can sort out the problem there and then.

Kennedy is an honest person. No sensible Ghanaian can deny him of his honesty except those who are crazy to gain political power by hook or by crook. A person who does not know the difference between his children or family members and the public when it comes to condemning them for wrongdoing. A person who does not shield his political party members from wrongdoing but rebukes and exposes them same as he will expose and castigate rival political party members.

This is the person Ghana needs, if truly, we want to see the country developed. He hates the commitment of malfeasances by whomever. He really has Ghana and the collective interests of her children at heart.

He is somebody who does not know the difference between his children and other people if it comes to seeking their welfare. This quality of equality among people in him, has made him such an admirably unrivalled philanthropist in Ghana.

For Ghana to develop in the midst of having so many corrupt officials, we need an ACTION MAN in the person of Kennedy Agyapong. He will be able to ensure the enforcement of the laws to rid Ghana of the devastating official corruption and the inability to enforce the laws for the good of the people.

Don't write him off because of his known emotive insults. I shall elaborate on this in my future article.

On Dr Alhaji Mahammudu Bawumia. He is a farsighted individual and a technocrat who has long term implementable policies to advance Ghana for the collective interests of Ghanaians. No wonder many a discerning Ghanaian not blinded by myopic and populist politics calls him "Mr. Digital".

He is very innovative. He is putting in place structures to get almost all Ghanaians captured on his brain child "Digitization-cum-Digitalization". By this, great improvement will be seen in the economy of Ghana to transform the lives of Ghanaians for the better. With time, Ghana will be rid of ghost names on her public pay vouchers; all houses and their occupants will easily be known; drivers, especially taxi drivers, will easily find their way to their destinations using Global Positioning Systems, thus, satellite navigation device; capturing many workers for the purposes of tax collections, etc. All these are the measures being put in place for the good of Ghana by Dr Alhaji Mahammudu Bawumia, a visionary intellectual doubling as the current Vice President of Ghana.

Again, until now, he is an honest person who has the development of Ghana at heart.

On Dr George Akuffo Dampare, although currently not into politics, he will be a very good president if he were to become one. His dedication to duty and preparedness to enforce public adherence to the laws of the land is unique. Ghana’s main problem that is setting the country and the people therein back is the abundance of active official corruption with its devastating ramifications. Because of corruption, the nation’s water bodies, virgin forests, arable and fertile lands, all of which constitute life, are being destroyed by the heartless Chinese and their Ghanaian accomplices to the detriment of the nation and her citizens.

Were armed robberies, murders and all sorts of crimes not rampant in Ghana without any effective means to mitigate them until Dampare was appointed the Inspector General of Police (IGP). Have the crimes not been greatly reduced since he became the IGP?

Anyone who has the ability to honestly enforce the obedience of the laws of the land without fear or favour, will be a good president. If he could do this as an IGP, will he not be able to do greater things as president where all that he has to do is to issue orders and they will be carried out?

On Dr Kwabena Duffour; he is a technocrat with the welfare of Ghanaians and the nation at heart. He has very good policies and programmes that can move the nation forward. He is a farsighted individual who does not share in the populist and propagandist views expressed or harboured by many a corrupt Ghanaian politician.

As said somewhere in my previous publications, he had decided to embark on adding value to the raw materials produced in the country before exporting them abroad to earn the country more revenue. Is it not the same as the policy of “One District One Factory”, thus, industrialization of Ghana, as is being pursued by an equally farsighted President Nana Akufo-Addo?

Additionally, I am privy to his policy that could raise more revenue to the government from the nation’s ports without necessarily raising import duties. That policy is credible and if he does become the president of Ghana and implements it, it will be marvelous.

He has more nation-advancing policies and programmes up his sleeve. He will implement them if he is given the nod to become the future president of Ghana.

I shall write separately about the four individuals mentioned above in my future publications. How I wish all four could be a team to rule Ghana in various coordinating positions. What an effective or perfect team that will be!

The current state of Ghana with the corrupt and “do-nothing but earn more money” mentality of Ghanaians, we require an action man who is strong, honest, firm and incorruptible, to rule the nation.

Let me define some of the words employed in the publication for the better comprehension by readers.

2. PRAGMATISM: “the quality of dealing with a problem in a sensible way that suits the conditions that really exist, rather than following fixed theories, ideas, or rules”

3. HONESTY: “the quality of being honest” and HONEST is “free of deceit; truthful and sincere”

4. DIGITIZATION: “is the process of converting information into a digital (i.e. computer-readable) format”

5. DIGITALIZATION: “is the use of digital technologies to change a business model and provide new revenue and value-producing opportunities; it is the process of moving to a digital business”