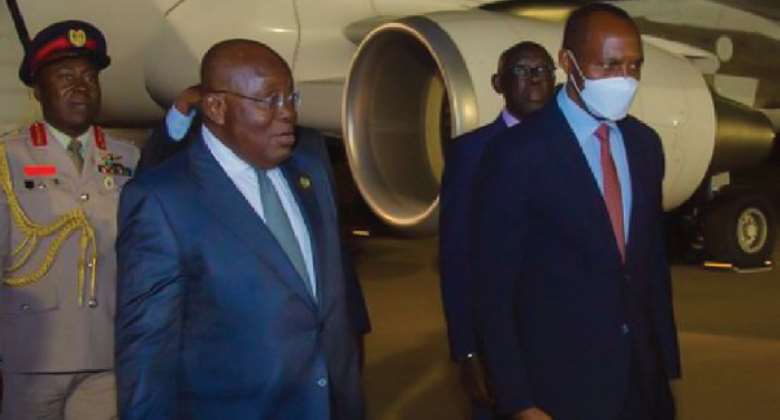 The Presidency, Jubilee House has insisted that President Akufo-Addo only charted a private jet from Brussels, Belgium to Kigali, Rwanda, because flights are not working in the European country due to strike action.

This is contained in a press release issued by the Communications Bureau of Jubilee House following what it has described as false allegations made by North Tongu Member of Parliament (MP), Samuel Okudzeto Ablakwa.

In a post on his Facebook page on Thursday night, the North Tongu MP alleged that President Akufo-Addo chartered the luxurious Airbus ACJ319 jet for his latest trip to Belgium and Rwanda at a cost of €20,000 an hour.

“For President Akufo-Addo’s current trip to Belgium and Rwanda beginning Sunday the 19th of June, 2022 to attend the 15th Edition of the European Development Days Forum in Brussels, Belgium, and the 26th Meeting of the Heads of Government of the Commonwealth of Nations in Kigali, Rwanda; we can confirm a conservative bill of €480,000.00.

“The 480,000 Euros which is derived from 21 hours of total flight time plus other industry charges works out to some 4.1million Ghana Cedis at current exchange rate,” Samuel Okudzeto Ablakwa shared in his post on Facebook.

Insisting that the claims by the North Tongu MP are false, the Presidency has issued a press release to set the records straight.

According to the Presidency, the President travelled to Belgium onboard an Air France Commercial Flight (AF0584), which departed Accra on Sunday at 7:20pm, made a stop-over in Ouagadougou, Burkina Faso and then continued to Paris.

The release adds that all of President Akufo-Addo’s 12-member delegation travelled commercial.

“Upon arrival in Paris, President Akufo-Addo and his delegation travelled via train to Brussels to attend the European Development Days event, where, on Tuesday, 21st June 2022, he was a keynote speaker, and later held meetings with the President of the European Investment Bank on two key subject areas – the financial assistance to Ghana for the Development Bank Ghana and for the construction of a vaccine manufacturing Plant in Ghana.

“He also held a meeting with His Excellency Charles Michel, President of the European Council, on matters of mutual interest, especially the ongoing terrorist activities in the Sahel,” the Jubilee House press release has explained.

The Presidency explains that even though President Akufo-Addo had to charter a flight from Belgium to Rwanda, it was only because it was an emergency.

“With the Presidency having been given prior information regarding the strike action before the President’s trip to Brussels, the option to travel using a direct commercial flight from Brussels to Kigali was not available.

“Thus, the decision was taken to charter a flight for President Akufo-Addo and his entourage to make the eight hour and forty-minute flight (8h 40min) flight from Brussels to Kigali on Wednesday, 22nd June,” the Jubilee House press release signed by Eugene Arhin who is director of Communications read.