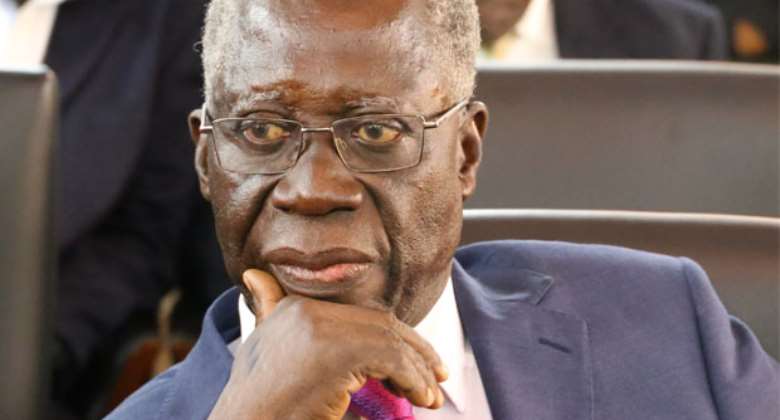 As I vividly recall, in the leadup to the 2008 General Election, it was Mr. Alan John Kwadwo Kyerematen who, having been soundly beaten to a distant second place in a Presidential Election Primary Contest which witnessed then-Candidate Addo Dankwa Akufo-Addo emerging as the undisputed victor, expressly indicated to the top party hierarchy that he and his faction of party supporters had a major grievance to settle with or against the winner of the December 2007 New Patriotic Party’s Presidential Election Primary that had been held in the Great Hall of the country’s flagship academy, to wit, the University of Ghana, Legon.

So, it comes as completely news to me, when Prof. Yaw Amoateng Acheampong, in his rather scandalous article titled “Ethnic Chauvinism and the Implosion of the NPP: An Open Letter to Yaw Osafo-Maafo” (Modernghana.com 6/20/22), makes the following assertion: “We were all in the country when, beginning from 2008 and 2012 campaigns, word went round within the party that (Nana) Akufo-Addo had ‘decreed’ that he couldn’t work with certain individuals in the national executive of the party. Whaat?”

Even assuming hypothetically that, indeed, Nana Addo Dankwa Akufo-Addo had made any such politically regressive statement such as Prof. Yaw Amoateng Acheampong claims in the article in reference here, it was, nonetheless, Mr. Alan Kyerematen who would adamantly refuse to have his quite formidable faction of New Patriotic Party (NPP) members and supporters, including the then lame-duck President John Agyekum-Kufuor and the latter’s Prempeh College schoolmate and Presidential Chief of Staff, Mr. Kwadwo Mpiani, who would tell a conflict-resolution committee of Eminent Elders of the party, Chaired by the legendary Mr. Bernard Joao da Rocha (1927-2010), aka Joe da Rocha, Founding National Chairman of the New Patriotic Party, that there was absolutely no way that he, Mr. Kyerematen, and his faction of NPP members and supporters could amicably and collaboratively work with the 2008 Akufo-Addo Presidential Campaign, to ensure that victory was delivered to the most progressive political party establishment in Ghana.

Mr. Kyerematen would shortly follow up his flat refusal to work with Candidate Akufo-Addo with a widely publicized Letter of Resignation from the New Patriotic Party. It is interesting to note here that absolutely nowhere in his afore-referenced tirade of anti-Akyem article does Prof. Yaw Amoateng Acheampong mention the foregoing incontrovertible fact of history. The critic, even more significantly, makes absolutely no attempt to explain to his readers precisely what motivated or influenced Mr. Kyerematen, a decidedly unconscionable political opportunist, to accept the cabinet portfolio of Trade and Industry Minister, a portfolio that he had hermetically and continuously held in the Kufuor-led first New Patriotic Party government in Ghana’s Fourth Republic, in the present Akufo-Addo-led government of the New Patriotic Party for some 6 years now.

Now, what kind of scholar indulges in the sort of “Selective Amnesia” that Prof. Yaw Amoateng Acheampong has so blithely and pathetically decided to indulge here? As well, speaking of Nana Akufo-Addo’s having internally decreed which party stalwarts he would be willing to work with or not work with, perhaps it would interest the retired sociology professor in/of South Africa to learn that this writer, a staunch supporter of both Presidents John Agyekum-Kufuor and Addo Dankwa Akufo-Addo, had personally received a phone call from one Mr. Osei Bonsu, a completely unexpected and an unsolicited phone call, in which the latter, a sometime Media Attaché to the Ghana Embassy in Washington, DC, at the time that Mr. Kyerematen was Ghana’s Ambassador to the United States of America, in which Mr. Osei Bonsu, an ethnic Bono from Sunyani, the former Brong-Ahafo regional capital and presently capital of the Bono Region, painfully and categorically informed this writer that then-President Agyekum-Kufuor, whose wife, Mrs. Theresa Mensah-Kufuor, is also of Bono ethnicity, was vigorously campaigning against the presidential candidacy of Nana Akufo-Addo and giving out American dollar notes in various denominations to party supporters and members of the general public in the streets of Sunyani.

Mr. Osei Bonsu would solemnly swear to yours truly that he was telling me the truth, and that it was the reporter’s own birthmother who had called her son, to wit, Mr. Osei Bonsu, to inform him as such out of the great pain and sorrow that the old woman felt about the same. Now, I sincerely don’t recall the fact of whether I had written about this politically most treacherous and scandalous episode in NPP history in one of my hundreds of thousands of media columns, but it would not be very long before we would learn that Mr. Osei Bonsu had been mysteriously, but not wholly unexpectedly, brought up on some apparently trumped up charges of embezzlement by the ethnic-Asante dominated Executive Committee Membership of the United States of America Chapter of the New Patriotic Party and been promptly and summarily expelled. Now, let’s talk about the Akyem Mafia!

Today, even as I prepare this column for the press, I have absolutely no idea about the whereabouts of Mr. Osei Bonsu, although I have been informed by somebody who claims to have been his classmate at the Ghana Institute of Journalism (GIJ), Accra, Ghana, that Mr. Osei Bonsu may be living somewhere in the Mid-Western Region right here in the United States. I have also been personally the subject of a politically devious attempt to compromise my loyalty to then-Candidate Akufo-Addo in London, a little over a decade ago, while I was briefly vacationing in the greatest colonial imperialist capital in the world, by a corporate gang of NPP stalwarts led by Mr. Sammy Crabbe and a couple of the Asante- and Bono-descended Kyerematen-Kufuor Factionalists, as they called themselves at the time.

Now, this dastardly attempt to get yours truly to switch loyalties fell through, when I flatly let it be known to these Kyerematen-Kufuor Factional Strategists that I was absolutely not for sale, nor would I consent to swearing allegiance to any human personality or entity right here on Earth, including the now-President Akufo-Addo, who had since long before both personally and by proxy earnestly solicited my assistance as a writer and a journalist for whose writings and trenchant political commentaries he had great regard and sedulously and studiously read at the least opportunity. That was well before I even got to know that both of us were, in fact, blood relatives and closer in kinship that I had originally imagined.